Spanish naval officer. When in 1770 news reached Buenos Aires of the British settlement in Port Egmont, Governor Francisco de Paula Bucarelli y Ursua assembled a squadron of five frigates, under the command of Capitán de navio Juan Ignacio Madariaga in the frigate Industria and a contingent of 300 men of the Regiment of Majorca with additional troops from Buenos Aires, to evict the British. Madariaga entered Port Egmont alone in the Industria on 4 June 1770 and at first merely asked for water, being as he explained from Buenos Aires en route for Puerto de Soledad (Port Louis). Three days later, in bitter wintry weather, the remaining four frigates entered the harbour. These were the Santa Catalina, commanded by Fernando Rubalcava and the Andalucía, Domingo Perletto, which had entered Port Egmont the previous February, accompanied by the Santa Bárbara, José Díaz Veanez, and the Santa Rosa, Francisco GIL. The only British vessel in the harbour was the small 14 gun sloop Favourite, Commander William Maltby, while the settlement was under the command of Commander George FARMER, whose ship the Swift had been wrecked in the entrance to Puerto Deseado in Patagonia. 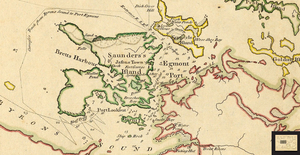 Farmer promptly concentrated his men on shore and instructed Maltby to bring the Favourite nearer the settlement, which he did in spite of the Spanish firing two warning shots in her direction. On 8 June Farmer wrote to Madariaga requesting him to leave since he had received the water he had asked for. Madariaga countered by inviting Farmer to view his troops, which he did the following evening. The Spaniard then wrote to the two British officers warning them to leave Port Egmont, which they declined. The next morning, 10 June, Spanish troops were landed near the settlement. After a few desultory shots from both sides, seeing the impossibility of defence against such a force, Farmer was forced to accept the inevitable and asked for terms of surrender, which were granted. Madariaga then took possession of Port Egmont. One of the articles of capitulation had been that the Favourite could carry away with her all she could and depart as soon as she was ready for sea. But the Spaniards detained her rudder until the middle of July, when she departed, leaving Madariaga in full possession of Port Egmont.