Spanish naval officer. In 1757, as an alférez de fragata, Gil had spent some time in Malta, serving in a Maltese ship curbing pirate activity in the Mediterranean. As a teniente de navío, Gil was sent to the naval station in the River Plate, in command of the frigate Santa Rosa, and was part of the squadron under Capitán de navío Juan Ignacio MADARIAGA which entered Port Egmont in June 1770 and forced the surrender of the British garrison under George FARMER. During his time in command of the Santa Rosa Gil was employed with smaller vessels on surveying and reconnaissance duties in Magellan Strait and the Falkland Islands, and thus was familiar with the islands. 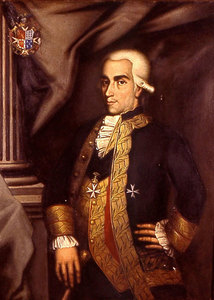 452 Spanish naval officer and governor of...

He was still in command of the Santa Rosa when he took over from Domingo CHAURI as comandante gobernador at the Spanish settlement of Puerto de la Soledad (Port Louis) on 5 January 1774. Probably later that year the frigate Santa Perpetua was sent to Puerto de la Soledad with sufficient provisions and stores for eight months and 30 soldiers commanded by infantry captain Pedro Amores to relieve the garrison. But as it proved impossible to load all the stores on the frigate she was accompanied by the brig Santo Cristo del Buen Fin, commanded by Juan PASCUAL Callejas.

As well as his usual duties as governor, Gil was asked to ensure that the British had indeed complied with their undertaking to abandon Port Egmont, which the Spaniards sometimes referred to as Puerto de la Cruzada. In consequence, in 1776, Gil sent Pascual in the Santo Cristo del Buen Fin, to confirm that the British had evacuated Port Egmont as promised and to make a plan of the port. Pascual reported that he found indications that the settlement had been visited recently, he presumed by the British. He also destroyed the buildings of the settlement and took down from the door of the blockhouse the lead plaque which Samuel CLAYTON had placed there and took it back to Puerto de la Soledad. 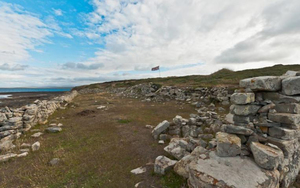 The ruins of the first British...

A little later Gil sent Piloto Juan de la Peña to Port Egmont in the brig Santa Paula, which had arrived at Puerto de la Soledad in January 1778, to make a further examination and to survey the port. Peña anchored below Monte de la Vigía {Look-out Hill}, the 810 foot high hill on Keppel Island , near the entrance to Port Egmont, from where he could see a brig at anchor off the former British settlement, which was not flying an ensign. Peña remained here for five days watching the brig's launches taking away and loading objects that had been abandoned there. Peña returned to Puerto de la Soledad to obtain provisions and to report to Gil, who sent him back to Port Egmont, where Peña continued to observe the brig for seven days, when the brig departed. He then entered Port Egmont and after a careful examination was able to report some timber, but no signs of any people.

On 10 May Gil reported to Viceroy Juan José de Vertiz his opinion that the British had indeed abandoned Port Egmont. In 1777 Pascual was again sent to Port Egmont and this time he reported that the British had been seen in the area catching and processing seals, suggesting that Spanish territorial jurisdiction was being violated. Gil requested to be relieved of his duty as governor on the grounds of ill health and was replaced on 19 February 1777 by Ramón de CARASSA.