Spanish army and naval officer, was born at Plasencia, Extremadura, Spain. He began his military career on 28 April 1768 by joining the army as an alférez in his native Plasencia. Bonavía transferred to the navy on 13 April 1782 as an alférez de navío, although retaining his army rank. First he was given time to study mathematics at the Royal Military Academy of Barcelona. After various appointments, both ashore and afloat, Bonavía was promoted to teniente de navío on 21 September 1789, by which time he had seen action at the blockade of Gibraltar and in South American waters against the Portuguese. 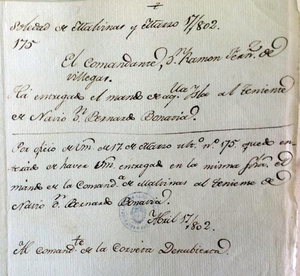 Following peace being signed with Britain, he was sent in the brig Paloma to the River Plate, where he was appointed in command of the corvette Descubierta and sent to the Spanish establishment in Puerto de la Soledad (Port Louis)to act as comandante gobernador, taking over from Ramón Fernández on 31 March 1802 and serving in this post until 21 July 1803 when he was relieved by Antonio LEAL. Bonavía returned to Puerto de la Soledad for a second term as governor, taking over from Leal in mid March 1804 until relieved, again by Leal, on 21 March 1805. Bonavía returned to Puerto de la Soledad for a third term as governor, taking over from Leal on 20 March 1806, serving there until the end of August 1808, when he was relieved by Gerardo BONDAS. In June 1807 provisions in the settlement almost ran out, new supplies only arriving on the day the last daily rations, consisting of six ounces of bread and some salt meat per person, had been issued. As Bonavía pointed out to the viceroy, the timely arrival was most fortunate as it was the height of winter when temperatures were extremely low. He added that the settlement now had supplies of flour for six months, dry pulses for fourteen months, dried beef and pork and wine also for six months. On 16 August 1808 Bonavía reported that there were 215 cattle of all ages in the settlement, mostly kept in corrals, and 828 horses of all ages, some of which were tame and presumably broken. This extended third term may have been caused by the British attacks on Buenos Aires and Montevideo in 1807. It also made Bonavía the Spanish governor with the longest accumulated period in this post. During his third term as governor Bonavía wrote to Viceroy Rafael, Marqués de Sobre Monte, on 6 July 1807 to assure him that he was prepared to defend the settlement and resist any invasion. He was also willing to accept a delayed replacement. This eventually occurred on 17 April 1808 when he was relieved by Bondas in command of the brig Nuestra Señora de Belén. During his first term as governor Bonavía was promoted capitán de fragata on 5 October 1802, serving in that rank until his retirement in 1811.

Bonavia's wife, Cipriana Obes, was sister to Dionisia Obes, married to Jorge PACHECO, who in turn interested Louis VERNET in the Falkland Islands.