Spanish naval officer. In 1803 Leal was attached to the Spanish naval command in Montevideo as a teniente de navío, where he was given command of the corvette Atrevida and sent to the Spanish settlement at Puerto de la Soledad (Port Louis) to serve the first of his two terms there as comandante gobernador, taking over from Bernardo BONAVÍA during April 1803. At that time the tours of duty in the Falklands had been scheduled to last one year, with the change-over occurring usually between mid-March and mid-April. The Atrevida appears to have been accompanied by the brig Nuestra Señora de Belén, under the command of Gerardo BONDAS, which had sailed from Montevideo on 10 March 1803, arriving at Puerto de la Soledad on 17 April, after an uncomfortable passage due to contrary gales and changeable winds. Fortunately, however, as Leal reported to Viceroy Joaquín del Pino, her cargo of provisions and other necessities to last the colony for a year, had not suffered. While the Belén was being refitted for her return voyage Bonavía formally turned over the governorship of the colony to Leal, before returning to Montevideo in the Descubierta, accompanied by the Belén. 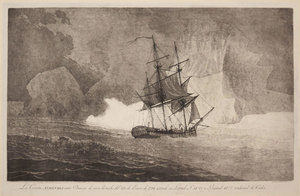 When Leal returned to Puerto de la Soledad in the Atrevida for his second term as governor, it appears that he was again accompanied by the Belén as she was involved in a dramatic incident in November 1805, which Leal reported in detail to the new Viceroy Marqués de Sobre Monte. Having received reports of repeated sightings of potentially hostile activity along the south coast of East Falkland, Leal sent six mounted armed men to investigate. The commander of the party, Pedro Ramón Pando, was able to locate the intruders by a fire they had started on the coast, which was out of control. Being on horseback the party had no difficulty in rounding up 'the enemy that offered no resistance', taking from them a launch which was beached close by. Pando was then able to capture their ship, a virtually new brig of over 250 tons, which was at anchor nearby. She was the former Spanish vessel, San Agustín, which had been captured by the British privateer Antelope off the coast of Chile, and which was bound for St Helena. The prize master, Andrew Johnson, with a crew of only five men, had been forced to take shelter in the Falklands by stress of weather and shortage of water. Leal's first priority was to man the brig and secure her cargo, but his efforts were in vain. Just over two weeks after her recapture the brig's improvised stone anchor dragged and the brig stranded on a nearby reef, fortunately without loss of life. The Belén, which had arrived at Puerto de la Soledad on 19 September, still under the command of Gerardo Bondas, was then sent to recover the brig's cargo, which her British crew had taken ashore to a shed they had built in their desperate attempt to lighten the brig and save her. Having loaded the cargo, the Belén was in the process of taking it to Puerto de la Soledad on 29 November, when an even stronger storm broke, driving the San Agustín further onto the reef, from where it proved impossible to refloat her, so only part of her cargo was saved.

On 4 January 1806, the sumaca Nuestra Señora del Carmen, commanded by José Sobino, reached Puerto de la Soledad, Leal reporting to Viceroy Sobre Monte, that her expected cargo and that of the Belén had arrived in good condition. Then on 21 March, Leal formally notified the viceroy that he had transferred to Bonavía the garrison and everything attached to it per inventory, including four stores of peat to ensure that the settlers did not suffer an unavoidable scarcity. Leal then sailed for Montevideo, where he remained in command of the Atrevida, taking part in the defence of the city when it was attacked by the British. When the fall of the city was imminent his ship was set on fire and blown up by Leal to prevent her falling into enemy hands.