colonial secretary, was born on 26 December 1855, the fourth son of John Glasgow Grant CMG, Speaker of the House of Assembly in Barbados and Mary Elizabeth Grant, née Walter. He was educated privately. In 1882 he served as private secretary to the Education Board in Barbados. He was private secretary to Sir William Robinson, governor of the Windward Islands 1883-5 and again at Trinidad 1885-1891. He was sent on a special mission to Venezuela in 1887 in connection with the seizure of the British ships Henrietta and Josephine. He became private secretary to Sir WB Griffith, governor of the Gold Coast {Ghana} in 1891, was called to the Bar at the Inner Temple in 1897. and was made resident justice at Harbour Island, Bahamas 1897. He served in the colonial secretary's office in British Honduras {Belize}in 1899 and was acting colonial secretary and acting attorney general; he administered the government there in 1905. 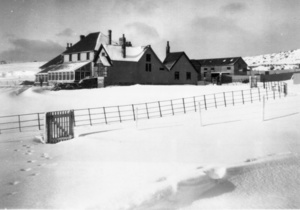 163 GH under snow: photograph by Grant.

Grant was appointed colonial secretary in the Falkland Islands in January 1906 and administered the government in 1907. In June 1908 he wrote to Alexander Harris in the Colonial Office, (enclosing some competent photographic views of Stanley):

My office has not been a sinecure I assure you - anything but. I am grateful for having been sent to the Falklands - the climate, notwithstanding its rigours, has done me a world of good; but kind friend do not keep me too long in my present post. The years roll on. I aspire to something a little higher, and am striving to deserve it.

He was posted as colonial secretary to the Leeward Islands in 1909. The Falkland Islands Magazine noted in October 1909:

The Hon. H.E.W. Grant who expected to return here after a short holiday in England this month, has left us for good. He has been offered and has accepted the post of Colonial Secretary of the Leeward Islands. While congratulating Mr Grant on his move, which of course means promotion, we can say at the same time that his removal from the Falklands is regretted by all here. During his residence in Stanley he won the respect of all by his never-failing courtesy and tact. His genial presence will be greatly missed at all our social functions.