teacher and community leader, was born near Aberdour, Aberdeenshire on 7 February 1922, the eldest of six children of Alexander and Janet, née Burnett. His parents' working lives meant moving between farms and Nick was educated at a series of small country schools until the age of thirteen. 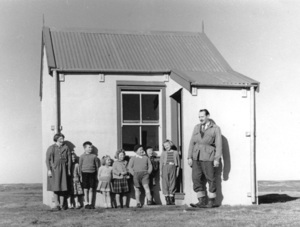 168 With the children at Fitzroy school.

He took up farm work and then in 1942 joined the RAF. After demobilisation in 1946 he won a scholarship to Aberdeen University and from 1947-1949 studied there for the Agricultural Diploma. He then joined Scottish Agricultural Industries as their north-east Scotland representative and worked with them until 1953. 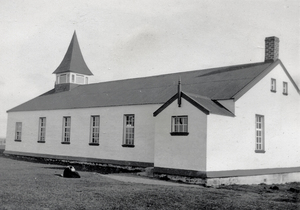 He covered a large beat on horseback, including the outside houses at Swan Inlet, Black Rock, Laguna Isla, Burnside, Camilla Creek, Brenton Loch, Arrow Harbour, and Myles Creek. He normally stayed with each family for two weeks before setting off on his rounds again. Subsequently he taught at Walker Creek and then at the settlement school at Fitzroy.

After four years of Camp teaching, Nick Hadden became the farm accountant and book-keeper/storekeeper, based for most of the time at Goose Green.

In 1957 he married Sheila, daughter of Murdoch and Helen McLeod of Darwin. He played a leading part in the life of the community, becoming secretary of the Darwin Harbour Sports Association in 1958, a position he held for over twenty years. He also started a local band in which he played the piano accordion and in 1966 he founded the Goose Green Social Club, transforming recreational facilities for families living in the area. In 1971 he was awarded the British Empire Medal for his contributions to the community. 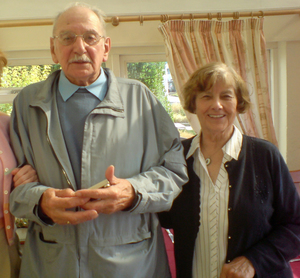 Nick and Sheila Hadden in retirement...

A keen photographer who developed and printed his own pictures, Nick Hadden also made film recordings of local activities from an early date, progressing from ciné film in the 1950s to video in the 1990s. Through this work, undertaken over a period of great changes, he built up a unique archive documenting the Falklands social life to which he had been such a major contributor.

He was appointed nominated member of LegCo in 1976 and in 1981 he moved to Stanley to oversee the Falkland Islands Company farm accounts at the main office.

He formally retired in 1987 but remained active in local life, becoming chairman of the Falklands branch of the Red Cross and campaigning and fundraising for the introduction of the Blue Bus service, now successfully established as a key facility for older members of the community. He and his wife Sheila live in Stanley.