actor and television presenter, was born in Stanley on 9 June 1917. His birth certificate gives his name as above, although he was christened Denys Jack Valentine McDonald Hobley. He was the second child of the Rev Charles McDonald HOBLEY and his wife Gladys, née Blanchard, having an elder sister Betty Louise. His father was assistant chaplain of Christ Church Cathedral, Stanley between 1912 and 1918 when they left for Chile where the family stayed until 1928. Moving to Burgess Hill in Sussex, he attended Brighton College between 1931 and 1936. He began his acting career in repertory, acting under the name of Robert Blanchard, and toured before World War II in Priestley's Time and the Conways. During the war he joined the Royal Artillery and was involved in a bizarre plot, ultimately abandoned, to abduct Hitler and fly him to Britain - Hobley was among those briefed to seize the plane when it landed. He spent the last months of the war working for a forces radio station in Ceylon {Sri Lanka} which proved a turning point in his career. 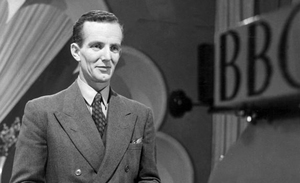 In 1946, having changed his stage name to McDonald Hobley, he was selected from over 200 applicants for the new BBC television announcing job at a salary of £12 per week. He became effectively the face of BBC television and in 1954 he was voted 'TV Personality of the Year' having become very popular with viewers. His charm and wit made him a favourite for panel games and chat shows. Once, when out walking with Sir Laurence Olivier, he was asked for his autograph. He obliged and was then asked 'Does your friend act too?'

He 'defected' to the new commercial TV in 1956 being tempted by the £100 a week salary. However, although busy and popular he became unhappy with frequent appearances in childish programmes in which he felt he was called upon to make a fool of himself. His ITV contract ended after three years and he became chairman of the radio panel game Does the Team Think?, returning to BBC TV for two series of It's a Knockout while expanding his career back in the theatre. His later career was varied but it never brought him the kudos of the earlier years; he appeared in the West End in the long-running farce No Sex Please - We're British and various thrillers. There were a lot of TV roles in some of which he played himself. He acted in repertory and pantomimes and his last appearance just before his death was at Leatherhead in Forty Years On. 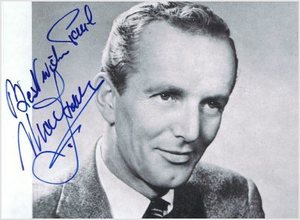 He continued to work for television and radio and in the year before he died McDonald Hobley returned to the Falklands for a Channel 4 programme about the South Atlantic Dependencies. He was interested in the stamps of the Falklands and was a member of the Falkland Islands Philatelic Study Group. He died on 30 July 1987 aged 70. He had been married three times and was survived by his third wife Pauline, his two earlier marriages having ended in divorce.