admiral, was born on 2 July 1862 at Hartforth in Yorkshire, the fourth son of Christopher Cradock and his wife Georgina, the daughter of Major Gordon Duff of the 92nd Highlanders.

He entered the navy in 1875 and three years later as midshipman of the Pallas took part in the British occupation of Cyprus. In 1884, as a sub-lieutenant, he landed with the naval brigade for garrison duties in Upper Egypt and as first lieutenant of the Dolphin served with the Eastern Sudan field force where he was chosen by the governor-general of the Red Sea province to act as his aide-de-camp. Cradock later served in the royal yacht from which he was promoted to commander. 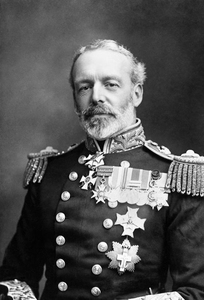 During the Boxer Rising in China on the Alacrity he commanded the naval brigade which led the Allied forces at the storming of the Taku Forts on 17 July 1900, serving with distinction. He subsequently directed Allied forces during the relief of Tientsin and, later, of Siku.

Cradock's career went from strength to strength: he filled every appointment with great credit, he was single-minded, and as he never married the navy was his life.

He wrote several books, Sporting Notes in the Far East in 1889, Wrinkles in Seamanship in 1894 and in 1907, just after he was promoted to captain, he wrote Whispers from the Fleet, a book for young officers who were starting out on their careers. 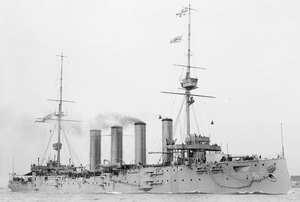 Cradock was promoted to rear-admiral in 1910 and created KCVO in 1912.

He was appointed in February 1913 to command the North America and West Indies station and with the outbreak of World War I in August 1914, he was given responsibility for protecting the North American coast from the St Lawrence River to Brazil with his flag in the armoured cruiser Suffolk.

From October 1914 he was charged with the pursuit of von SPEE's East Asiatic Squadron which was moving across the Pacific with the Falkland Islands as a possible objective. Cradock hoisted his flag in the aged cruiser HMS Good Hope and arrived in Port Stanley in early October accompanied by three other warships. 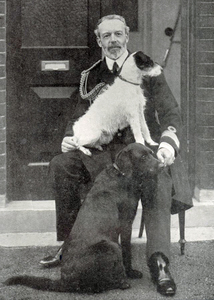 Cradock (as a Commodore) and his...

On 18 October he met Governor ALLARDYCE at Government House to discuss the situation. Allardyce was worried that von Spee might try to occupy the Falklands as a base from which to harass shipping in the South Atlantic and realised that the German squadron was far stronger than Cradock's. Cradock was convinced that he would not survive the war and, as he left, told Allardyce that he would not see him again and asked if he could send his medals and decorations ashore for safe keeping, to be sent to his home after the war was over.

On 22 October the battleship Canopus limped into Port Stanley, in need of repairs which would supposedly take about four days. Cradock decided he could not wait for her and left for the Pacific on 23 October with the Good Hope, Monmouth, Glasgow and Otranto. 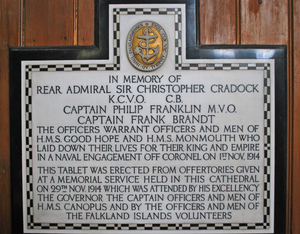 Memorial in Stanley Cathedral to the...

The two fleets met near the Chilean port of Coronel on the evening of 1 November and without the twelve-inch guns of Canopus, Craddock's aged ships and under-trained crews were no match for the Germans. Good Hope and Monmouth were sunk with all hands and the other two ships linked up with the trailing Canopus and returned to the Falklands.

A service was held in Christ Church Cathedral, Stanley on 22 November 1914 and a memorial tablet was erected in the Cathedral paid for by donations from the offertories.

A large memorial was erected in York Minster and unveiled in 1916 and there is another monument in the church of St Agatha, Gilling West, near the family home at Hartforth.

No one has doubted Cradock's courage and, egged on by the Admiralty to find and confront von Spee, he would not flinch from the challenge. But it was a fatal mistake to leave his most powerful ship to follow and the tactical handling of his fleet during the battle of Coronel was poor. 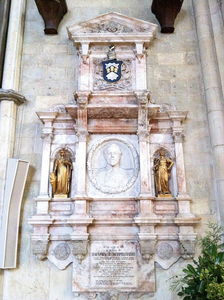 Memorial to Kit Cradock in York...

The kindest obituary comes in Allardyce's memoir of those eventful months: 'Cradock was an extremely nice man, one of nature's gentlemen. I saw a good deal of him and we became great friends ... He was an extraordinarily brave man ...'

Christopher Craddock; Wrinkles in Seamanship: A Help to "Salt Horse," and a Book on the Groundwork of Seamanship for the use of Sailors. J. Griffin & Co. 1894

Steve Dunn; The Scapegoat: The Life and Tragedy of a Fighting Admiral and Churchill's Role in his Death. The Book Guild 2014.