chaplain, was born on 2 December 1882 at Lichfield, Staffs where his father, Charles Hobley, was choirmaster at the Cathedral; his mother was Mary Louise, née McDonald.

He undertook theological training and attended St. Edmund's Hall, Oxford and the Lichfield Theological College. In 1907 he was ordained deacon, followed in 1909 by ordination as a priest.

On 31 January 1912 he married 22 year-old Vera Gladys Blanchard, a doctor's daughter, at Sevenoaks, Kent, and later that year he left for the Falkland Islands to take up the post of assistant chaplain at Christ Church Cathedral, Stanley, arriving on the Orcoma on 11 December 1912. 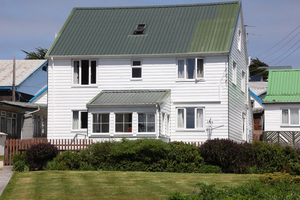 He should have sailed on the ill-fated Oravia but was delayed, although his furniture and effects were on the ship when she was wrecked on the Billy Rock in Port William. Thus the family arrived at the Church House with no possessions.

Hobley was a keen trained musician, having been a chorister at St Paul's Cathedral for seven years and a choirmaster of the school choir in Derby, where he was also first lieutenant and acting captain of the Officers Training Corps; he was keen to work with young people and while near Swindon had organised the largest group of Boy Scouts in England. 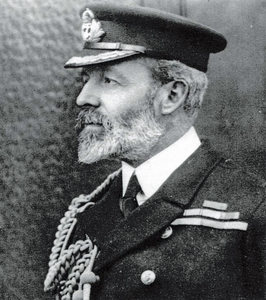 On their arrival in Stanley, Mrs Hobley was pregnant and in February 1913 she gave birth to their first child, Betty Malvina Louise.

Hobley's musical training stood him in good stead while he was in the Falklands as he was able to direct and produce entertainment for the Islanders; his first production was in June 1913 when he directed a musical programme for the annual dinner of the Stanley branch of the Overseas Club.

At the end of June he embarked on the first of several Camp visits, visiting 32 houses and conducting 13 services.

In April 1915, Edward James Seymour resigned as dean of Christ Church Cathedral, leaving in June. The following October, the Rev J Stanley Smith accepted the post and for a while considered bringing his own priest with him. Thus Hobley's incumbency was in jeopardy, but he retained his position. He took over the Stanley Scout Troop that month. His son was born on 9 June 1917 and christened Denys Jack McDonald on 28 July (later to become known as McDonald HOBLEY, one of BBC television's first and most popular announcers). 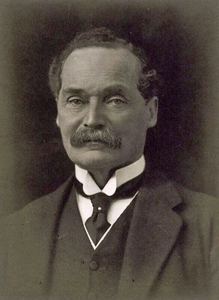 During the five years he spent in the Falklands, Hobley played an important part in Stanley affairs both ecclesiastical and social as he and his wife supported every club and event and the Church Magazine benefited from his help as editor, contributor, printer, mechanic and anything else required.

Hobley was not universally popular however and was considered to be anti-government, apparently denouncing the governor of the colony (Governor ALLARDYCE) as a 'moral bully' the lowest and 'most degraded and most loathsome level to which the Devil can bring a man'. When war broke out he publicly derided the local volunteers and the defence preparations being made. He was also openly critical of Admiral CRADOCK's decisions before the ill-fated battle of Coronel and it was decided that his contract would not be renewed on its termination. 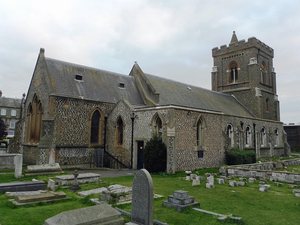 In 1918 the Hobleys were due to leave for the Cape Verde Islands where he had been appointed chaplain but war conditions prevented him from travelling there and instead he was sent to Valparaiso where he became temporary assistant chaplain to the English Church.

He remained in Chile until 1927 returning to England to become principal of St. Peter's Court School in Burgess Hill and licensed priest of the Diocese of Chichester.

The family moved to Hove and he became vicar of the Old Church in 1938. He died on 20 May 1951 in the Royal Sussex County Hospital, Hove.

In 1917 Hobley wrote and produced a small guide and history of the Falklands which was sold with all profits going to Christ Church Cathedral. It included an anthem 'Furthest South' written by him and later set to music by Sister Rosa VENERONI who, as well as teaching at St Mary's School, was the organist at the Catholic church. It is the closest the Islands have to a national anthem, though it is no longer heard.

Motherland, we love thee yet!

True to Empire, God and Country

As the years have rolled along

Spanish, French and others came

But the Flag that kept us strong -

Furthest South - it bears thy Name.

Though some here have never seen thee

Truly British is our heart

When the Empire cry of Duty

Rings through all the calm still air,

And the Motherland is calling,