Italian Roman Catholic sister, was born in Scaldasole, Pavia, Italy on 19 July 1866. We do not have any details of her early education: she learned much of practical Christianity from her parents and when at the age of twenty-three she decided to become a nun, she was a well-educated young woman. 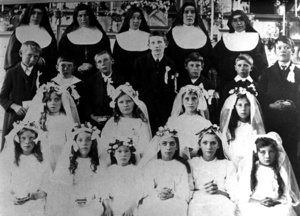 In 1889 she joined the Salesian Sisters, sister congregation to the Salesian Fathers, in Italy. Her superiors saw in her a woman very gifted in music, languages and needlework. They also recognised in her enthusiasm and the right spirit to be able to work on the missions. Before the end of 1889 she was sent to South America for her religious formation and arrived in Punta Arenas in February 1890. Her apostolic work kept pace with her formation as a Salesian Sister, both in Punta Arenas and on Dawson Island where her work was among the Onas Indians.

Sister Veneroni came to the Falkland Islands with two companions, arriving on 31 January 1907. Fr MIGONE, the priest then in charge of St Mary's in Stanley, had invited the Sisters to come and take charge of the school. The mission house built by Fr DIAMOND was prepared for their coming and would henceforth be known as the Convent. In preparation for coming to the Falklands, Sr Rose had to learn English and sometime after her arrival she adopted the English form of her name. She is always spoken of as Sister Rose.

Sr Rose and her companions began teaching 17 February 1907. Fr Migone recorded that on that first day, there were 60 pupils present and by the end of the school year, the roll stood at ninety-five. Sister Rose's contribution to the school curriculum was music, religion, art and fine needlework. She trained the children for their annual school concerts. She also gave music lessons in the evenings and was organist at St Mary's Church throughout the 27 years she spent in Stanley.

As bursar in the convent, it fell to Sr Rose to provide food for the passengers from the wrecked RMS Oravia who found refuge with the Sisters in 1912 for their five-day stay in Stanley. In the Convent she was at different times the mother superior and bursar. There is a touching example of real ecumenical collaboration between Sister Rose and Christ Church Cathedral. The words of the hymn Furthest South were written by the Anglican canon CM HOBLEY and set to music by Sr Rose: for many years the hymn was sung in the Cathedral and at St Mary's.

On 31 January 1932, the Sisters celebrated the Silver Jubilee of their arrival in the Falklands. Sr Rose was in declining health and two years later returned to Punta Arenas on 18 January 1934. Back in Punta Arenas she taught music to the novices at the Salesian Formation House. She died on Punta Arenas on 29 June 1935.

For 27 years, Sr Rose devoted herself entirely to the people of the Falklands. It was said of her that she did everything she could to enthuse the Catholics of Stanley. To her pupils in school and in her evening classes she gave an appreciation of the finer things of life. In her own capacity she contributed much to the personal and spiritual well-being of the people, but it was collectively as a group that the Sisters made the greatest impact in the Falklands.