Argentine Roman Catholic sister, was born into a Catholic family on 8 November 1870 in Baradero, Buenos Aires. Her parents, William Ussher and Anna née Walsh had earlier emigrated from Ireland. She was the third child and the third daughter in a family of twelve and did not enjoy good health throughout her childhood. She was educated, as were her older sisters by the Salesian Sisters. Her two older sisters entered the Salesian Congregation to become nuns and two of her brothers became priests. In April 1894, now enjoying much better health, Mary Ussher followed her older sisters into religious life, and began her formation as a Salesian sister. 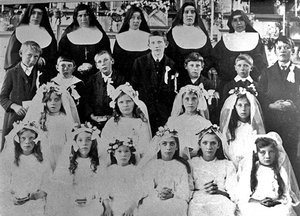 First communion at St Mary’s, around...

In 1909 she was sent to the Falkland Islands to become head teacher of St Mary's School. She travelled on board the Oropesa which almost ran aground on a sandbank a short distance from the Islands. When Sister Ussher arrived at the door of the Convent on 3 June 1909, the Sisters were totally taken by surprise, as they did not know when to expect her. She was known to her pupils as 'Sister Director' and, even today, her past pupils refer to her as Sister Director.

On the night of 12 November 1912, when the RMS Oravia struck the Billy Rocks, and about 200 passengers were brought ashore, Sister Ussher offered accommodation in her school for a group of about 40 third class passengers, and helped by the other sisters cared for these passengers during their five day stay. Again, in December 1914, after the Battle of the Falkland Islands, Sister Ussher put her school at the service of the community by setting up emergency wards and being ready to nurse should there be any wounded brought ashore.

She developed the school curriculum for her day pupils and set up evening classes in art, needlework and Spanish. Catholic girls from camp boarded at the Convent and Sister Ussher acquired Viti Cottage so that boys also could board. The Convent also provided residential care for Stanley children if and when there was the need.

In 1937, Sister Ussher was awarded the King's Silver Medal in recognition of her many years of service to the people of the Falklands.

She was one of the group of five Sisters who left the Islands on 3 June 1942. Thinking that they might be able to return and resume their teaching when the war ended, they took only their personal belongings. They did not return. Sister Ussher died in Buenos Aires 5 May 1949. Her obituary sums up her life in the Falklands and her contribution to the whole community. She was:

...a familiar figure in the life of the colony. She was a welcome figure among the population of Stanley. Her gentle, quiet, unobtrusive manner, her prudent and unaffected friendliness won the hearts of all who came in contact with her. She was esteemed by the colony, and successive Governors and Heads of Departments respected her abilities and invaluable work, for which she was the recipient of a reward.