Roman Catholic priest, was born of pious Italian parents in Montevideo on 13 December 1863. His early education was at the Salesian College there. As a young man, he travelled to Europe with his family and they visited the Salesian House in Italy where Don John Bosco (later canonised), the founder of the Salesian Congregation, lived. Bosco had a profound influence on Migone who in 1879 began his studies in Buenos Aires to become a priest as a member of the Salesian Congregation. He was ordained in June 1887, and in November 1889 he arrived in Stanley to be assistant priest at St Mary's Catholic Church which had become a Salesian mission the previous year. In November 1891 Migone returned because of ill health to Montevideo and shortly afterwards became director of the Salesian College in Santiago. In January 1895 he was back in the Falklands as assistant priest but remained only until December that year when he left to do mission work with the Indians in Patagonia and the Pampas. During his first two periods in the Falkland Islands Migone contributed monthly weather observations which were published in the Falkland Islands Magazine. 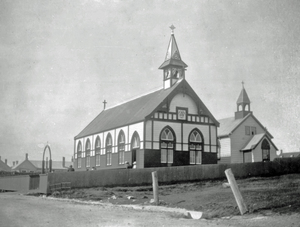 On 3 January 1905 Migone arrived in the Falkland Islands for the third time on taking up his appointment as priest in charge of St Mary's Catholic Church and remained until his death in 1937. As an early task, he undertook the improvement of St Mary's School and succeeded in 1907 in recruiting as teachers a group of nuns, Sisters of the Congregation of Maria Auxiliadora, the sister Congregation to the Salesian Fathers. St Mary's School had Protestant as well as Catholic pupils and Migone by local fund-raising sought to ensure that no child was turned away because its parents were unable to pay the fees. One of the nuns was head teacher of the school but he taught Spanish, French, technical drawing and woodwork both to the pupils and, in the evenings, to adults.

At some time before 1913 Migone started the first cinema in the Islands on the school premises. He said later in his book 33 Anos de Vida Malvinera (33 Years of Falklands Life) that he wished to:

provide recreation and entertainment for young people who not having any other means of entertainment, used to mis-spend their hours in the pub, the only meeting place ... we also learned how to make use of it for educating children. 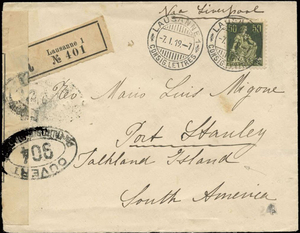 Showings of films of educational value were open to pupils of both St Mary's School and the Government School.

In 1913, Migone installed electric lighting in St Mary's Church and in the school, which the Falkland Islands' Magazine in August 1913 reported as being 'a great asset to his Cinematograph and ... a great success'. Admission was charged for showings intended for general audiences. These made a profit and the profits were donated to local and overseas charities. Some showings for children were free, and on occasions up to 200 children attended. He asked his cinema audiences: 'no stampee de feet, no kickee de stage' and this became a catchphrase by which many people remembered him in later years. He is reputed to have spoken five languages but it appears that his English may, at least in his earlier years in the Islands, have been highly accented.

In 1914 Migone helped to form a branch of the Red Cross in Stanley. Acutely aware of the sufferings of the French and Belgian populations in World War I he sent some of the profits from his cinema to relieve their suffering. Governor ALLARDYCE in the early years of the war had supported this but Migone in 33 Anos de Vida Malvinera records an unfortunate public rift with Governor YOUNG in 1916 over his wish to send funds to help the widows and orphans of French soldiers killed at Verdun. He also mentions in that book the arguments he had in later years with Governor HODSON in which he asserted the validity of the Argentine sovereignty claim. 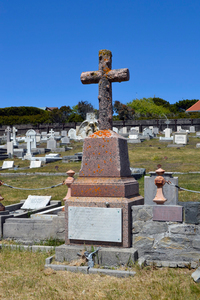 Migone of course undertook the usual duties of a Roman Catholic priest. He visited the sick and his parishioners and others, both in Stanley and in Camp. He became a very well-known and respected figure in the Falkland Islands. He was a good carpenter and did work himself on the school and the church, until in 1930 he became ill and had to undergo an operation. His health gradually failed. Nonetheless he continued to carry on his duties as best he could. When he was not able to walk to church he celebrated Mass at his house in Barrack Street, when he was hardly able to stand. He refused to return to the Salesian house in Buenos Aires because he wished to end his days in the Islands. About three months before his death he was taken to the King Edward VII Memorial Hospital Stanley and died there on 1 November 1937 (All Saints' Day), after just over 50 years as a priest. A large congregation of Catholics and non-Catholics attended his Requiem Mass, including local officials and many ordinary people who wished, in the words of Montague CRAIGIE-HALKETT, the acting governor, to honour his good work and good example during his many years in the Falkland Islands.

He was buried in Stanley Cemetery.