His father was MP for Frome 1918-23 and Devizes 1924-45. His two elder brothers were killed in the Great War. Antony was educated at Marlborough and Pembroke College, Cambridge and then took the tenancy of Rainscombe Farm near Marlborough, Wiltshire, which he farmed until 1947. 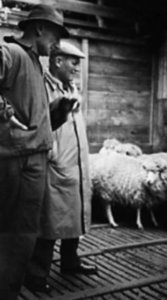 In 1928 he married Stephanie, daughter of Edred Corner, a successful London surgeon, by whom he had three sons. Hurd represented Newbury in the House of Commons from 1945 to 1964 and for many years served as chairman of the Conservative Parliamentary Agricultural Committee. For fifteen years until 1958 he was agricultural correspondent of the Times. 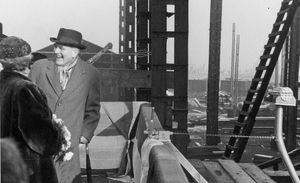 Hurd's letters and his wife's letters and diaries give a vivid picture of Island life at this period. His approach was that of a farmer not a tourist. With his wife he visited and revisited the Company's settlements, in all parts of the Islands, and made friends with its scattered shepherds and managers and their wives. They travelled by boat, helicopter and by Land Rover along the uneven tracks, often bogged down, once stranded for four and a half hours between Fitzroy and Darwin. 'The roads are full of potholes', Hurd wrote, 'and the water looks like whisky and to strangers has a peculiar taste and effect'. They listened carefully to the life stories of the Company's employees. Young men out on contract were paid on a credit system, and could expect to save £500, or even £1000 after five years. They inspected the Company's new school at Darwin with room for 40 boarders, and other Company projects such as a mink farm and a large peat-cutting machine.

Hurd, who had at one stage declined the governorship himself, usually stayed one or two nights on these visits at Government House, despite the fact that Government House then had no guest room big enough for two people. He and his wife got on well with successive governors, though he felt that they should serve for longer, and that more power should be devolved to the LegCo. He was scornful of the big Whitehall-financed project for a meat freezing works at Ajax Bay which had failed around 1954. He urged that the taxpayer's money (£2 to 3 million) should be spent on a system of all-weather roads. He was not happy either with some of the Company's own policies; there were heavy sheep losses and the lambing ratio of the Romney ewes was only 65%. Having visited smaller owner-run farms he concluded that the problem was malnutrition, and the answer a grassland improvement scheme initially covering 6,000 acres, bringing clover and grass varieties such as Yorkshire Fog from the United Kingdom. So far as he was concerned the Argentine claim to the islands was ridiculous and irrelevant to the actual life of the Islanders. He was created a life peer (Baron Hurd of Newbury) in 1964, and died of a heart attack on holiday in Antigua on 12 February 1966. After his death his wife sustained their deep affection for the Falkland Islands and entertained many Islanders at her home in Wiltshire.

Anthony Hurd's eldest son Douglas visited the Islands as foreign secretary in 1994 and is president of the Falkland Islands Association in London. He has presented his mother's diary and letters from the Islands to the Museum at Stanley.