colonial secretary, was born on 30 August 1921 in Croydon, Surrey, the son of William Peters Jones and Stella Jones. His father had been an army chaplain in World War I and was vicar in Croydon.

Jones was educated at St George’s Chapel Windsor, where he was a choir boy and then at Blundell’s School, Tiverton, and finally at Jesus College, Cambridge. He served in the RAF from 1941-5, reaching the rank of squadron leader. 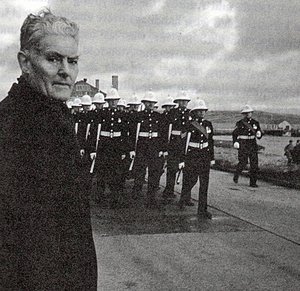 After the war he joined the colonial service and was sent as a cadet to Nigeria, becoming a district officer in the eastern region. In 1963 he married Jean AUSTIN in Lagos. He was permanent secretary in various ministries in Lagos and in 1964 was appointed OBE. In 1966 he was transferred to newly independent Gambia as secretary to the cabinet and permanent secretary in the office of the prime minister Sir Dawda Juwara.  When Juwara became president, Jones was appointed his special adviser.

In 1969, Jones was appointed to Stanley as colonial secretary and he and his wife arrived in the RMS Darwin on 10 May. He succeeded ‘Tommy’ THOMPSON who had served with Governor HASKARD for five years, when (in Jean Austin’s words) ‘a breath of fresh air and new ideas and initiatives were needed to break the impasse’ in Anglo/Argentine relations. Some progress was made in the establishment of an air-link using Argentine Albatross amphibian aircraft from Stanley harbour. After three years (again to quote Jean Austin) ‘people’s hardened attitudes gradually softened and they became more tolerant towards Argentina’, although the events of the succeeding ten years proved this view over optimistic. 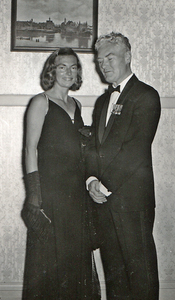 John Jones (as Acting Governor) at...

In addition to his official duties, Jones, with his wife, took over from his predecessor the editing of the Falkland Islands Journal for the years 1971 and 1972.

In March 1972 the Joneses left Stanley by Albatross amphibious aircraft and returned home via Buenos Aires. They were posted to Honiara, the capital of the Solomon Islands in the Pacific. Jones was secretary to the public services commission and clerk to parliament. The islands became independent in 1978. In 1980 Jones was transferred to Kiribati {the former Gilbert Islands} which was already independent. He was appointed permanent secretary to the ministry of finance and adviser to the parliament.

Jones retired in 1984 and went to live in Garlieston in Galloway, his wife’s maternal home.

He died on 28 December 2016: his ashes were buried beside the graves of his parent in Hythe, Kent.