character, was a mystery person. No documentary records of her existence have ever been found, but stories about her have been legion at Port Stephens, West Falklands, since the area was first farmed in the 1860s. She is reputed to have been a runaway coloured slave from America, who was brought to the Falklands on a ship during the American Civil War. This would probably have been an American whaling ship, as they found a lucrative harvest in the South Atlantic and many harbours in the Falklands where water and wild fowl were plentiful. 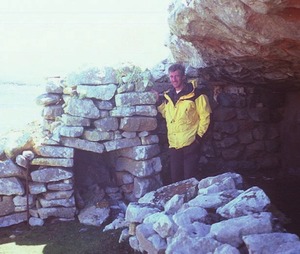 At Port Stephens farm, on the south coast there is a large creek called Kit's Creek. It is here, sheltered from the south winds, that Kit was supposed to have built her small shelter under an overhanging rock, facing the creek. The walls are stone up to the overhanging rock, which formed a roof over the structure. The stonework is rough and would probably have had an infill of clay and grass, to seal out damp and draughts. There were two rooms, probably a bedroom and another for cooking, as it had an open fireplace and a chimney, also of rough stone.

These small living quarters are several yards from the creek, offering fish and wild geese for Kit's consumption, provided she could catch them. There would have been seasonal berries and wild birds' eggs to supplement her diet. The story goes that Kit's larder was further enhanced by supplies brought ashore from crewmen of visiting (or passing) ships, in return for personal favours that Kit provided.

It is said Kit disappeared as quietly as she had arrived, but no one knows for certain when this was. All that remains now is the semblance of Kit's 'cave' in Kit's Creek, rather tumbled down, but recognizable as a small living quarter.