master-mariner and pioneer whaler, was the elder brother of Captain CA LARSEN. In November 1904, as his second-in-command, he helped to establish the whaling station at Grytviken on South Georgia and, in 1909, with the support of a licence from the Falkland Islands Government, opened a new whaling station at New Fortuna Bay. 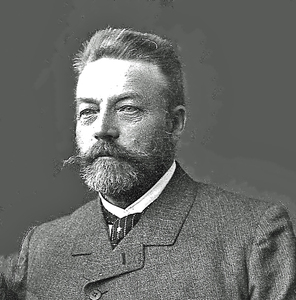 Captain Lauritz Edvard Larsen was born in the parish of Østre Halsen, Tjølling, near Larvik in Norway in 1854, the first child of Ole Kristian Larsen (1826-1890) and Ellen Andrea Engelbrigtsen (1829-1887).  He went to sea at an early age and later obtained his ship’s master’s certificate. In 1882 he married a Danish woman, Anna Marie, born 1857. Like his three brothers Carl Anton, Johan Magnus and Oluf Emil, Lauritz became engaged in the bottlenose whaling trade, which had become in vogue after 1880, venturing to the North Sea and the Arctic. In 1902 he replaced his younger brother Carl Anton as manager of Skjold og Værge’s whaling station located at Mafjord på Ingøy, Finnmark, in Arctic Norway.

When CA Larsen sailed south from Norway in 1904 to establish the whaling station on South Georgia for the Argentine registered Compañia Argentina de Pesca, he appointed Lauritz as his deputy whaling manager and master of the company’s first transport ship, the barquentine Rolf. He was charged with assembling and supervising in Sandefjord the loading of buildings, factory equipment, materials and stores that were required by the expedition so that when the ships arrived at South Georgia little time would be lost on re-assembly. 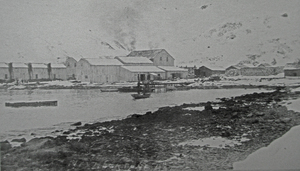 At the end of their first season’s work at Grytviken, CA Larsen departed from Grytviken for Norway leaving Lauritz in charge. However, in July 1905, Lauritz received an unexpected visitor when the South Georgia Exploration Company under Ernest SWINHOE arrived in a schooner at Cumberland Bay. Swinhoe had obtained a licence from the Falkland Islands Government to establish a pastoral enterprise and undertake sealing on the island. He was surprised to find Lauritz Larsen in charge of a newly constructed whaling station and protested that his license covered the whole of the island. Unfortunately, Swinhoe soon found the Island’s climate was too severe for pastoral use and having failed to secure any seals, he sold his stock of horses and sheep to Larsen. On departing, Swinhoe handed Lauritz Larsen a written protest, dated 28 September 1905, in support of his lease contract with the Falkland Islands Government asking him to withdraw. The incident nearly caused a diplomatic fracas with Argentina, but after some frenetic negotiations, an arrangement was concluded in March 1906 for Larsen’s company to also secure a lease for the land they had occupied with the Falkland Islands Government. Later that same year Lauritz was joined at Grytviken by his wife Anna, who enjoyed working with the whaling crew preparing the valuable baleens of southern right whales for export.

Like his brother CA Larsen, Lauritz was always searching for new opportunities. Having determined that the stocks of whales at South Georgia would support another whaling venture, in June 1908 he paid a visit to Port Stanley and made personal representations to Governor ALLARDYCE for a whaling licence in his own name at New Fortuna Bay, South Georgia. In a note to the Colonial Secretary, Governor Allardyce wrote: 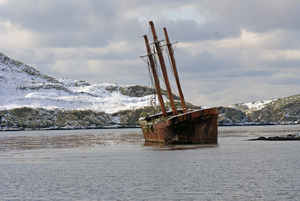 Wreck of the Bayard, (New Fortuna...

You should have seen Larsen plunge his hand into his breast somewhere and produce 250 golden sovereigns at the very thought of getting a station in South Georgia, subject to Colonial Office approval. This just shows what they think of the business...there is no doubt that he [Lauritz E Larsen] and his brother [CA Larsen] are the two pioneer colonists of the Dependency and that it was on their representation that the Argentine company was formed and started its operations in South Georgia. Captain L.E. Larsen’s record of four continuous years residence at South Georgia is probably unique and his request, therefore, merits special recognition. I am therefore disposed, in view of his record and the valuable information about the Dependency he has placed at the disposal of the government to approve his application for a lease of land in Fortuna Bay, a locality not hitherto applied for.

The application was considered favourably by the Falkland Islands government and was approved by the Secretary of State for the Colonies. Larsen returned to Norway in October 1908 and with the aid of his supporters in Larvik, the company A/S Ocean was formed with a capital of some 1 million kroner (c.£55,000). A site for the new whaling station on South Georgia had been identified at New Fortuna Bay (also called Ocean Harbour) some 12 miles to the south-east of Grytviken on the Island’s northern coast. When whaling operations commenced in 1909/10, Lauritz E Larsen was appointed manager. A substantial whaling station was constructed at New Fortuna which incorporated a large guano plant. Two newly Norwegian constructed whale catchers the Pelican and Penguin were deployed, together with a coaling hulk, the former barque Bayard,and a transport ship Ocean served the station to carry personnel, stores, materials, and whale oil to and from Norway.  The venture became very profitable, and Larsen became a rich man.

In November 1911, Lauritz Larsen and his brother sent down to South Georgia, eleven reindeer – eight hinds and three stags – with the object of building up a stock of animals to provide good hunting and fresh meat. The animals were obtained from Ivar Opdal at Filefjell Reinlag, Valdres, in south-central Norway and were transported to the island on board A/S Ocean’s Ocean (one animal died en-route). They were set ashore on the Barff Peninsula, south-east from Grytviken across Cumberland Bay East from where they spread along the coast towards New Fortuna Bay.

In 1915 Lauritz Larsen resigned his position as manager of A/S Ocean and returned to Norway. His position was taken by CA Larsen’s son-in-law Victor Esbensen. Lauritz Larsen does not appear to have taken any further active role in the whaling business. He had accrued a sizeable fortune in his period at South Georgia and appears to have retired but retained a commercial interest. Following the collapse in the returns from whale oil in 1920, the whaling companies at Stromness and New Fortuna Bay merged into the company A/S Vestfold. Much of the whaling station at New Fortuna, including Lauritz Larsen’s villa was dismantled and re-erected at Stromness.

Larsen died in Norway in 1924.  Lauritz Gap, a pass in the mountain range located to the north-east of Fleuret Peak on the Barff Peninsula, South Georgia is named after Lauritz Edvard Larsen.