Norwegian Lutheran pastor and lecturer was born on 30 March 1885 in the village of Furnes near the town of Lillehammer some 110 miles north of Oslo He was one of six children of school board member Hans Løken and his wife Oline Prestrud. 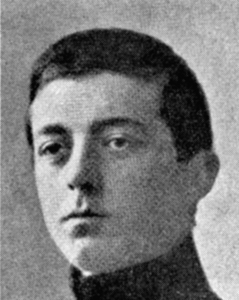 Pastor Loken as a young man

He began his theological studies in 1903, undertook military service in 1904 and was ordained as a priest in January 1912, following graduation at the University of Kristiania (Oslo). In 1911 Løken responded to an advertisement placed in the Norwegian press by CA LARSEN to serve as a priest and lecturer at South Georgia and was appointed later that year. It appears that this was a private arrangement between Larsen and Løken, not connected with the Norwegian State Church or the Seaman’s Mission. He may have been encouraged to apply for the job by his cousin Kristian Prestrud, who was first mate on Roald Amundsen’s polar expedition ship Fram. Løken made his way to South Georgia by crossing the North Sea by boat and onwards to Liverpool where he boarded the Pacific Steam Navigation liner Ortega for passage to Buenos Aires, where he was accommodated second class. At Buenos Aires he boarded the Pesca transport ship Harpon (Captain L. C. Larsen) and arrived at South Georgia on 1st April 1912. The inaugural sermon was held on Maundy Thursday.

Pastor Løken spent the winter and the next two seasons holding services and giving lectures ‘on common and useful subjects’ at Grytviken, New Fortuna Bay and on the factory ship NOR, while she was in harbour. The arrangement was gradually extended, by agreement with the other whaling companies on the island, so that during the summer he could make the rounds of all the whaling stations at South Georgia, ‘curing souls’. His services were also called upon if there was a fatality at one of the stations, to conduct the funeral. 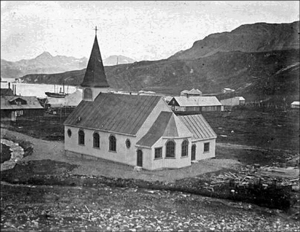 Grytviken church shortly after its...

However, there was some debate among the whaling crews whether the motives behind the appointment were to influence their political, religious and social attitudes so that they were commensurate with the needs and best interests of the companies. Fridthjof JACOBSEN, a manager at Grytviken who succeeded Larsen in 1915, later related that at the beginning, a good number of people turned up for meetings, but enthusiasm gradually wore off, so that only the managers and senior personnel from the Villa, or the ‘Slotte’ (‘Castle’) as the workers nicknamed it, attended.

Larsen and Løken often discussed the possibility of building a church at Grytviken, and a resolution was passed during a ‘Congregation Meeting’ in April 1912. An immediate collection resulted in 5,600 kroner (c.£300) being raised, the contributions varying from 2 kroner to 5,000 kroner. The largest sum was donated by LARSEN, who was also the guarantor for the remainder. However, rather significantly, the Pesca president Hermann Schlieper refused to contribute company funds towards the building costs, which were estimated to total 15,000 kroner (c £850). 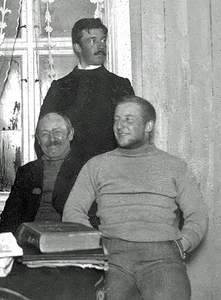 A small wooden Lutheran chapel, prefabricated by Strømmen Trævarefabrik, Norway, was purchased at a cost of 10,400 kroner (c £600) and shipped to Grytviken, where it was re-erected on open ground behind the factory, thereby becoming one of the most southerly churches in the world - complementary to the most northerly at Longyearbyen in Spitsbergen, which was also raised by Norwegians. The church was designed by Larsen’s son-in-law, architect Adalbert Kielland (1879-1956), who had married Larsens daughter Signe in 1907 in Buenos Aires; it had seating for 200 persons, a writing and reading room. A library was later installed.

Work on the construction of the church started on 25 November and by 14 December it was nearly complete. The church was consecrated on Christmas Day 1913 with representatives from many of the other companies also attending. Two bells, cast in Tønsberg by O. Olsen & Sons, were hung in its steeple. They were first rung at midnight on Christmas Eve. The bell ringer was mason Magnus Abrahamsen and the organist ‘a workers foreman’. The sexton was Captain Julius Løkke. During the service the first birth on South Georgia, a daughter Solveig to the company’s worksmaster, Jacobsen was christened. 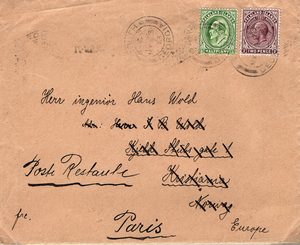 Letter from Loken to Hans Wold, the...

On the 17 September, the Bishop of Kristiania (Oslo) dedicated and dispatched a church record book to Pastor Løken for use at Grytviken church. Details of pastors, births and deaths were recorded in it. During the consecration, Pastor Løken looked in the direction of the tightly packed hall and remarked that ‘before him, with very few exceptions, were many young men in the prime of their lives, tough, weather-beaten and hardy, many of whom were obviously burdened by the exhaustion of their duties’. However, he had to declare that ‘religious life does not wax strong amongst the whalers and left much to be desired’.

He went on to say that he anticipated a lot more from them since they had erected their own church. Life at the station continued to be governed by the demands of the task in hand; if there was a good catch of whales it was taken for granted that work had to continue in its normal way, regardless of whether there was a church service or not. The church bells pealed rather disharmoniously with the commotion created by the working of the factory; the steam in the boilers, squeaking winches and other mechanical paraphernalia. ‘It was’, he added, ‘not surprising that the whalers became melancholic...many suffered from the despair and loneliness of working in an isolated, sometimes soulless community devoid of female company which frequently resulted in men being sent home as mentally deranged or worse committing suicide’. 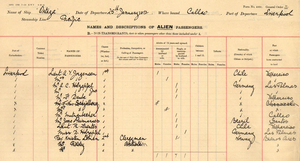 As for the general aura of the station Løken said ‘the smell from the factory was everywhere after the first whale was caught. It was in our food, in our coffee, in the water with which we washed, in our clothes and in our bunks. We were steeped in it’.

On Christmas Eve (Jule Aften) a large assembly always gathered at the Church. Christmas time, naturally enough, was a special occasion at Grytviken and South Georgia. Work stopped at all stations so that boats full of workers - even from the distant Prince Olav Harbour - could be present. After the Christmas sermon had been read, several rings of men congregated around the tree and familiar Christmas carols were sung. As the workers from our station always consisted of men from different nations it was often touching to see the deep effect of the carols, although the meaning of the words was not entirely understood.

Pastor Løken later commented: ‘This was a high spot in a time of materialism, because the whalers in South Georgia have established their own church and raised it without any assistance from home, the necessary funds being entirely contributed by the relatively few employees in Grytviken. Not only the Christians will rejoice because of this, but also all those who believe that the spiritual interest ought to have its justifiable place beside material interest’.

From Løken’s report, it could be concluded that, as spiritual master and Pastor to the whalers, his job must have been as hard as that of any man on the island. Generally speaking, his sermons were attended by only small congregations. A whaler from Leith Harbour later wrote: ‘It is a fact that a Norwegian clergyman has been appointed. However, I do not believe that he has won many souls to the Kingdom of God. Unfortunately, one hears so little of God's word at a whaling station’. The baptism of a child was a very rare occasion, whilst only four marriages were recorded and nearly all of these involved civil servants resident at King Edward Point.

When Løken returned home in the summer of 1914 (he departed South Georgia on 4 June) he was succeeded by another young theological graduate, Frithjof Zwilgmeyer, who had arrived at Grytviken on 4 May 1914. When his term of office expired in the summer of 1916 he was not replaced, and the church was effectively abandoned. CA Larsen, who also departed Grytviken in 1914, later claimed that the church was his personal property, and, on his death, a difficult legal problem arose as to who was its rightful owner.

After his period at South Georgia, Løken became resident priest at Fageborg near Oslo, and in 1916 vicar in Froland moving on to Alstadhaug in 1922. In 1927 he was appointed provost of North Helgeland, parish priest at Trinity in Arendal in 1936 and priest at Ringsaker from 1947 until his retirement. Løken participated actively in community affairs, by sitting on boards of schools, banks and child welfare organisations. In 1921 he married Signe Berthine Bertelsen (b.15.2.1899). They had no children.

Kristen Løken died at Prestrud in Hamar between Oslo and Lillehammer on 29 March 1975. He was buried in Ringsaker cemetery.

He is remembered by the name Løken Pond, named by the UK Antarctic Place-Names Committee in 1991. It is located east of Burnet Cove at Maiviken, in the northern part of the Thatcher Peninsula on South Georgia.