colonial chaplain, ninth of twelve children of William Lory, Packet Captain RN and Anne Pearce, was born in 1839. He was ordained priest in 1865 by the bishop of Gloucester and Bristol. Apart from time as a Royal Naval chaplain, 1866-70 and chaplain in the Falklands, 1872-76, Lory served in thirteen other parishes between 1863 and 1878. To be an assistant priest in parish after parish would suggest that Lory had an unusual character, as does his inability to stay long in one place. 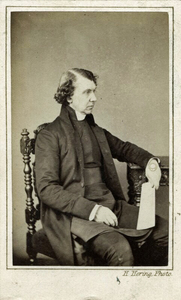 He arrived in the Islands in January 1872 as a locum replacing the Rev Charles BULL who would depart for England with his wife in April on leave. Lory was a somewhat querulous individual, who found fault with a number of different matters: the arrival of the Catholic priest Fr William Mason WALSH on a pastoral visit, the perception that Governor D'ARCY was liberal in his attitude and actions towards the Catholic community, the activities of Caroline D'Arcy (the Governor's wife) whom he regarded as a 'pervert' because of her conversion to Catholicism, his own miserable economic situation and his wife's health. The situation was alarming for Lory as he was only the locum or caretaker colonial chaplain. A growing Roman Catholic congregation in Stanley might be construed as a failure of his ministry. Lory maintained a voluminous correspondence with Dr Archibald Campbell Tait, the archbishop of Canterbury. By letter of 25 September 1874 Lory advised Tait that 'the small stipend on which I have been detailed is altogether inadequate for the support of myself and family...My arrears are £40....I came here with the hope of bettering myself not supposing that I should be almost ruined'. His wife Georgina Henrietta, daughter of the Rev John Webster Hawksley, was admitted to Wonford Lunatic Asylum in August 1871 on the authority of her husband, suffering from 'puerperal mania' (post-natal depression). She would remain there until released into the custody of her father in January 1876. Georgina Lory's term of internment practically coincided with her husband's stay in the Falklands. Lory wrote constantly concerning his situation to secretaries of state, Lords Kimberley and Carnarvon, and would be reprimanded by the latter for breaching protocol by not forwarding his letters via the Governor. Lory wrote three theological books, all published in London between 1871 and 1883.

Henry Coulson Lory; A book for naval men: containing a few remarks on the Sailor, the Captain, Chaplains and Midshipmen; HS Eland 1871