mariner. Little is known of the origins of Captain Charles Poole, one of the great seafaring characters in Falklands history. In 1900 he signed a declaration before the registrar in Stanley saying that he was 'a natural-born British subject and a native of Jersey.' There is a story in his family that the name Poole was a pseudonym and that he had been born 'Lawrence de Laing', but at present there is no documentary evidence to support this. Poole came to the Falklands in 1891 in the German barquentine Concordia, wrecked on 17 August on the north coast of East Falkland, near the bay which is today named after the ship. There was a heavy swell when the ship went ashore, the lifeboats were badly damaged and there seemed little hope of the crew surviving. However Charles Poole fastened a light line to himself and swam ashore. A heavier line was attached to this and everybody then got ashore, greatly owing to Poole, apart from the Master and the two mates, who refused to leave the ship and were drowned. 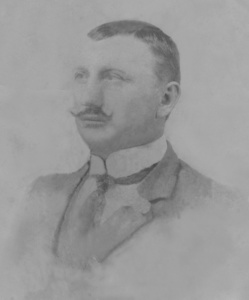 Charles Poole stayed in the Falklands working mainly on coasting schooners. He was a very clever man and soon taught himself navigation. In 1900 in partnership with four others, he bought the schooner Allen Gardiner which had previously belonged to the Keppel Mission Station. In March 1902 he arrived at West Point Island. The Allen Gardiner was beached in the sheltered cove and the ship's bottom cleaned. Other minor repairs were done with the help of my great-uncle, Arthur FELTON. Poole and Arthur Felton were very good friends. The West Point wool was then loaded for Port Stanley. Sadly, on the way to Port Stanley the Gardiner ran ashore in thick fog on the north coast of East Falkland, not far from where the Concordia had been wrecked. The loss of all the West Point wool was a heavy one, as it does not appear to have been insured. However, a year or so later a schooner anchored in West Point. Charles Poole landed and over lunch he remarked to my Uncle that he thought they should start unloading and wondered if Uncle and his men could help. Uncle was puzzled and said he was not expecting any cargo. It then was realized what a fine man Poole was. On board was a mile of fencing and all the material needed to build an extension on the house. Arthur Felton had had to cancel this because of the loss of all his wool. Charles Poole had bought the materials himself, saying there was no charge for any of it and he hoped it would help to make up for the loss.

Poole was of course a seal poacher, but so were many others. The Falkland Islands Government were after him from time to time for this and a variety of other misdemeanours and he made several appearances in court. In order to confuse the authorities, he once changed the colour of his schooner Rapida. He also altered the rig, making a very good job of it. He came to West Point one day afterwards and my Uncle, assuming Poole had a new boat, asked what had happened to the Rapida. Poole said, 'Well, I have changed her a little!' Charles Poole was a kindly man and well liked by many people - especially those on the small islands. My mother told me that one day when the Fortuna was becalmed off the coast of East Falkland, another vessel was near and a boat came over. It was Poole and he brought cases of fruit for everyone on the Fortuna.

Poole was known as a daring and skilled seaman and discovered many passages around the Falklands, especially the Jason Islands, which no ship was known to have passed through before him. He often visited the Diego Ramirez Islands, which lie well to the south-­west of Cape Horn, in the roughest seas in the world. Many of Poole's crews were deserters from sailing ships on the west coast of Chile. Most were heavy drinkers and difficult to handle. Incidents which involved the police sometimes occurred in Port Stanley, as they did with the crews of other ships.

The Rapida was anchored off the Patagonian coast near Punta Loyola one day in 1908 when a quarrel broke out among the crew and Poole fell or was thrown overboard. The story went that he was then shot in the water with a heavy sealing rifle. Two crew members and the pilot were later arrested on the Coast, but the true circumstances of Poole's death never became clear. A one-eared Chilean named Emilia or Amelia, who later often visited the Falklands as a crew member of other coasting vessels, was widely believed here to have been implicated in the incident.When the news of Poole's death reached the Falklands, Governor ALLARDYCE wrote to Arthur Felton: 'So Charles Poole has passed away with his boots on! His energy was misdirected. Personally, notwithstanding his many faults, I had a sort of sneaking liking for him. I think his cheek, his daring and his skill all appealed to me'. Allardyce even sent a despatch about Poole to Lord Crewe, the secretary of state for the colonies:

Despite his piratical and buccaneering propensities, he was a clever, civil-spoken and daring mariner. Only once was it possible for this government to obtain a conviction against him...He was invariably smart and well-dressed and in a land of phlegmatic people...it was a pleasure to come across a person of indomitable energy.

Charles Poole married Celina (also known as 'Celia' or 'Annie') Margaret Anne Alazia on 18 June 1894 in St. Mary's Catholic Church in Stanley. They had five children, although family life was unstable, with Poole frequently away at sea and in South America. Their second son, Charlie, was known locally as a famous horseman and was 95 years old when he died in 1993.

Poole was a bold adventurer, who in spite of his unconventional way of life earned the respect of many. He was typical of a generation of enterprising and courageous mariners who became a mainstay of pioneer settlement in the Falklands. The channel to the north west of West Point Island, between Cape Terrible and The Slipper, was always known as 'Poole's Passage', although it has never been officially marked as such on maps.