Ruddy was born in Belfast on 18 January 1906, the son of Robert and Mary Jane Ruddy. Despite the ‘troubles’ with local fighting in Ireland and the death of his eldest brother in World War I, he progressed well with his schooling in Belfast. As an adult, he moved to England where he trained to be a veterinary surgeon with the People’s Dispensary for Sick Animals (the PDSA) in London.

Following the outbreak of World War II, he signed up for the Royal Naval Volunteer Reserve (RNVR) in March 1940, and he was posted to HMS King Alfred in Hove, Sussex. He was particularly commended for his work training merchant seamen to use the guns placed on their ships. - known as the ‘coal scuttle brigade’. This work saved many ships and their cargo and the lives of many men.

Ruddy met Daphne Albery who was a member of the Woman’s Royal Naval Service (WRNS) based at HMS King Alfred and they were married at St Julian’s Church, Kingston Buci, near Shoreham by Sea, on 22 April 1944. 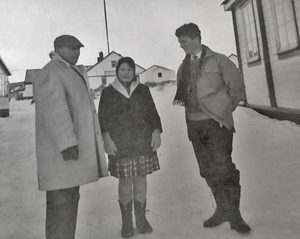 Henry Ruddy (left) with his daughter...

Ruddy was sent to Calcutta on a short naval posting and on returning finished his veterinary training. On his retirement from the Royal Navy, he had reached the rank of Lt. Commander. He then spent some time in Ireland before returning to England and becoming a local vet in the Hove area. During this period, their three children were born; Robin b.1945; Simon who sadly died shortly after his birth; and Jenny b.1951.

After several years, seeking a new challenge, he was employed by the Colonial Office as customs and administrative officer for South Georgia and set off on a single posting. He reported to Captain COLEMAN and took over when the Colemans went on leave. This was a busy posting with active whale and seal hunting and processing by the Norwegians at the whaling stations. During this tour Ruddy arranged for a sealer to check on Duncan CARSE after a terrible storm – despite Carse’s instructions that he should be left alone. Carse was in a dire situation as all his survival supplies had been lost and he boarded the sealer thankfully. ‘You saved my life’ he told Ruddy back at King Edward Point (as he finished off his whisky). 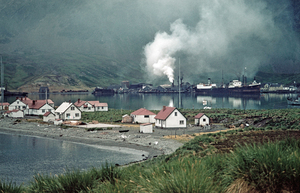 King Edward Point in the foreground,...

On his return on leave after two and a half year’s absence, it was decided that his wife and daughter would accompany him for his second tour. The Norwegians had stopped whaling by the time they returned to South Georgia so the posting was relatively quiet, and his daughter Jenny was the only child on the Island until the younger children of Betty and Basil BIGGS, Coleen and Peter, returned on holiday. Then the radio operator Norman Scott arrived back from leave with his wife Doris and their new baby Ann. Contractors also arrived to build the new Shackleton House, the replacement for Discovery House, which had become too small for the number of scientists and other single staff working at King Edward Point.

Daphne Ruddy and daughter left in June 1963, a little early before the end of the second tour for domestic reasons. Ruddy himself continued with two more tours before retiring in 1966. During this time the Japanese resumed whaling operations, so his role became very active again. He was highly commended for his service and also received letters of thanks from both the Norwegian and Japanese whaling senior management for his professional and dedicated work.

Henry Ruddy died in Steyning West Sussex on 12 February 1972 after a short illness.

The personnel file of Henry Ruddy, lodged in the Jane Cameron National Archives in Stanley, gives the following information:

Ruddy left South Georgia for the UK on18 November 1961.Ruddy and his, wife and daughter (11 years old), were booked on the SS Arlanza departing London 6 May 1962, connecting with RMS Darwin leaving Montevideo 12 June 1962 for South Georgia. He was appointed Senior Customs Officer and Administrative Assistant. The family arrived at South Georgia on 21 June 1962.

Ruddy finally left South Georgia on 9 February 1966 in the MV Kista Dan. He was Gazetted as retired on10 July 1966.