American artist, was born on 2 August 1947 in Lakeport, California, the son of Sara and John Sheridan.

His father, a construction superintendent, was also an extraordinary painter and draftsman who nurtured his son's talent. Sheridan left college after three years to practice his art full-time. Shortly thereafter he met and married Jeanne Pannell. 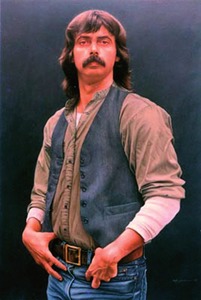 In 1971, after the birth of their first son, Elisha, the Sheridans discovered the Baha'i Faith. Inspired by the teachings of Baha'u'llah, they were eager to be of service to humanity.

When they were invited to visit the Falkland Islands to assist the Baha'i community there, they gladly agreed, even though they thought the remote location would end Sheridan's art career.

When they applied for employment permits, Jeanne Sheridan got a call from the Secretariat, asking if she could type. When she demonstrated that she could, she was asked to 'come to work on Monday'. This made it possible for Sheridan to concentrate on his painting.

So Sheridan's seven years in the Falklands proved to be the most important period of refining his skills and becoming internationally recognized as one of the group of "Living Masters™" of the art world. When asked what art school he attended, Sheridan answers, 'the Falklands'. 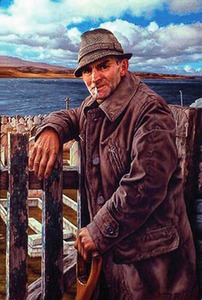 He received a number of commissions, including portraits and a triptych panorama of Rincon Grande. In the late 1970s,

Outward Bound Travel began arranging for groups of Argentine tourists to visit the Islands weekly. Among the stops on their itinerary were the Museum, a penguin colony, and Sheridan's studio. As a result, Sheridan was invited to exhibit 25 paintings in Mar del Plata.

There were times when he took on less delicate work: he painted the Falkland Islands Company lighter, signs like the large king penguin advertising the Travel Agency, and windows and doors at the new boarding school building in Stanley. 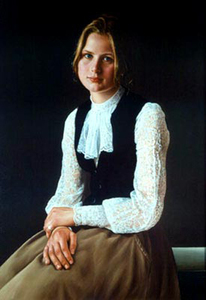 During the Argentine occupation, he worked with the Public Works Department painting the Spanish word 'Basura' on rubbish bins.

In April 1981, their second son, Maxwell, was born in Stanley. From July to November, the family travelled back to the United States. Jeanne Sheridan had prepared a slide show about Falkland Islands life accompanied by an audio tape produced at the Falkland Islands Broadcasting Station. This presentation was made in 44 cities in 33 different states during their 17,000 mile circuit of the USA.

To commemorate the 150th Anniversary of the Falkland Islands, Sheridan and Ian Strange were commissioned by the Falkland Islands Government to produce a series of eleven postage stamps, depicting historical events from 1833. Sheridan painted the vignettes for each stamp and Strange created the borders and script. The original artwork was sent to London on the last plane before the Argentine invasion. 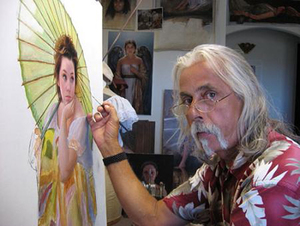 Duffy Sheridan in his studio at home...

In 1982, Sheridan was commissioned by the National Spiritual Assembly of the Baha'is of the United States to create an exhibition of his Falkland Island paintings, which was shown at the Royal Festival Hall in London and in cities throughout the United States. The exhibition generated a great deal of publicity for the Islands, including a cover story in the London Sunday Times Magazine.

Sheridan served on the Spiritual Assembly of the Baha'is of Stanley for seven years. He and his family remained in Stanley during the Falklands war and for a year afterwards. Sir Rex HUNT, on his return as civil commissioner, appointed Sheridan to the Rehabilitation Committee. Sheridan says he 'never met anyone in the Falklands who didn't have a great story - including us'.