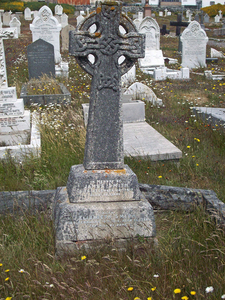 An agitator's grave - the headstone...

In 1880 Governor CALLAGHAN told the Colonial Office that he was in dispute with Smith over land leases. Smith was a useful butcher who had broken the monopoly of the FIC and PACKE Brothers:

yet I must state that his presence in the colony is not an unmixed good - as he is a crotchety litigious sort of man - and belongs to a school of politicians in the Falklands that I fear will one day give us trouble, who are inflamed with class jealousies and extremely Americanized in their ideas.

Smith appears in the colonial records as an assiduous letter writer in the 1880s, always critical and questioning. In February 1885 he 'respectfully invited' the governor to a public meeting to discuss sewage in Stanley. In August 1887, he was the founder of the Reform Club. Governor KERR describes him, with irritation, as:

a mischievous agitator, who has obtained an ascendancy amongst some of his fellow carpenters and a few of the labourers in Stanley by persuading them that they have grievances which might be redressed by a combination for that purpose. The well-disposed and peaceable inhabitants of the settlement look upon the movement with distrust and dislike...

The Reform Club launched a number of petitions to the Governor and to the Secretary of State, who were both unsympathetic. Among other points, the Club asked for representation in LegCo.

Smith was prominent among the lists of petitioners for many years and was a stone in the shoe of government. He dropped the name of an Irish MP, Swift MacNeill, with whom he was in contact and in 1890 the latter asked a question in parliament, taken up by the Belfast Telegraph, critical of governor Kerr. Indignantly, Kerr denounced Smith in LegCo on 10 May 1890:

how a mean obscure, illiterate and despicable individual may in his craving for notoriety and in his ignorant and misdirected malice become the cause of infinite trouble and annoyance to innocent and honourable persons...

When the Volunteers were formed in the 1890s Smith became a second lieutenant.

Smith died on 23 December 1917 of heart failure and senile decay; his wife died the following year. Both are buried in Stanley cemetery. Smith was the first of a series of humbler colonists agitating with little success for a fairer share in government.