Norwegian gunner and whaling manager, was born on the island of Vestre Bolærne in the Oslofjord. He started his whaling career at Finmarkskysten in the northern part of Norway. Then he worked as a gunner with the Telegraf expedition in areas around Svalbard (Spitzbergen). During the summer season in the north in 1905, he was a gunner on the whalecatcher Hauken while his brother Søren Sørensen was gunner on Ørnen. The factory ship was Admiralen. At the end of the season in 1905 they returned to Sandefjord. The owner, Kommandør Christensen, had decided to send Admiralen and the two whale catchers to the south. Bernt and Søren both followed as gunners. The expedition started in the areas around the Falkland Islands, and later on they arrived at South Shetland. On one occasion Hauken did not have enough coal to get back to Admiralen and the crew had to use furniture to make steam. 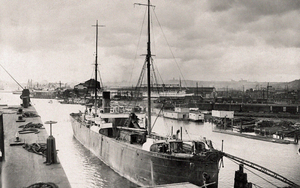 In 1907 Bernt and Søren Sørensen were two of the main shareholders in the new company A/S Tønsberg Hvalfangeri. The two brothers were employed as gunners on board Carl and Mathilde - the two whale catchers. In 1916 Bernt was badly hurt in an accident. The rope to the harpoon was lashed around his leg, and he was dragged overboard and under water as the gun was fired. He was rescued but his thigh muscle was torn off. He was lamed and this was his last season as a gunner. He stayed at his home called Borgheim until he died in 1924. Two small islands at the northeast side of South Georgia, used as a landmark, are named 'Søren and Bernt' after these two brothers.