RC monsignor, was born on 13 January 1912 in Newcastle upon Tyne, one of four children of Alfred Spraggon and Sarah Spraggon, née Martin. At the age of 22 he joined the Mill Hill Missionaries Junior Seminaries, Freshfield (Liverpool) and Burn Hall (Durham), then due to the war, completing his studies at Lochwinoch in Renfrewshire. He was ordained a priest on the Feast of St Peter and St Paul, 29 June 1945, by Archbishop Donald Campbell in St Andrew's Cathedral Glasgow and appointed to Buea in British Cameroons. At the request of the Chaplain's Department - Army he was appointed chaplain to the Gold Coast West African Field Force in 1951. Here he worked for the well being of the military and their families until Ghana's independence, retiring with the rank of major and an MBE. He often referred to the African junior officers who later tried to restore order in their countries as 'good men'. 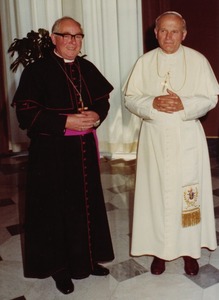 327 The Monsignor in good company.

From 1954 till 1971 Spraggon was engaged in organising mission appeals in England and Wales and in North America, becoming organising secretary in Freshfield. The end of 1971 brought an appointment to the Falkland Islands with the right to succeed Monsignor James Ireland (who had served in Stanley from 1952). This also included the care of the 'Stella Maris' seamen's hostel in Montevideo, (which was then the link to the Falklands, via the RMS Darwin). It was while there that he had to conduct and arrange a service for those who died on board a Blue Funnel Line ship and their families. The incident left him with a fear of fires - especially unattended ones.

The early 1970s were a changing time for the Islands, especially with the Joint Declaration of Buenos Aires of 1 July 1971, regarding communications and mutual understanding. Msgr Ireland retired in 1973 and Fr Spraggon became the second Prefect Apostolic of not only the Islands themselves, but also of South Georgia and the British Antarctic Territories. Though not an 'ordained' bishop his power and authority were equivalent, except for 'ordaining'. He set about his office with vigour. Not only did he press continued teaching of religious knowledge in both junior and senior schools, but he had many a debate with several farm managers over education for the children of their work force, remarking 'What was wrong with an educated shepherd - perhaps they leave because they want to be educated'. 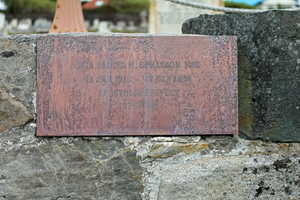 Daniel Spraggon was buried in the...

The second Vatican Council's changes put into effect by his predecessor were continued with renewed vigour. Hospital visiting was a daily event even on a Sunday - not only were Catholic families visited but those of other denominations. This also held good on the ecumenical side. Many joint services were conducted in a warm and friendly spirit, though when he had to be firm he was.

Contact with the vice-commodores of LADE and the heads of Gas del Estado and YPF brought its positive and negative aspects on both the political and religious sides. He made it clear that the Islands were British and that the people were British and wished and demanded to remain so. The mutual understanding was listening and working together for the benefit of both peoples and countries. On the 'religious' side he had often to inform the many visitors to the house that he - as monsignor - came under the Vatican directly and not Buenos Aires. An incident in 1981 when a visiting Argentine dignitary the Bishop of Entre Rios breached protocol by wearing his pontificals in the Islands while Spraggon was away led to a difficult situation. On his return Spraggon had to explain the situation as best he could, a grave misunderstanding on the part of the dignitary, but the monsignor's assistant had been in charge in his absence and the monsignor was still the prefect. In spite of these problems, relations within the Islands were cordial. 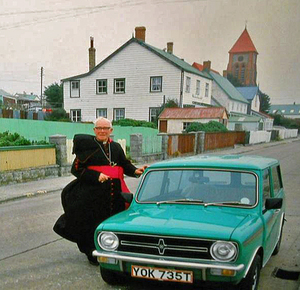 Monsignor Spraggon attempting to get...

During his early years Spraggon's parents had died and he had been brought up by John and Kitty Anderson, from whom he had learnt the butcher's trade. In Cameroon he had kept pigs, in the Islands he would keep cattle. His cutting up of a quarter or half was a joy to behold - and his handling of the carcass showed a robust frame but belied a none too healthy body which he managed to hide so well. Sausages, brawn and soups were also his forte. His plans for a small herd of cattle ended as he watched cow and calf fall to some hungry soldiers in 1982. Rivalry entered the house building late in 1981 when Spraggon began the new presbytery and LADE their new house. Who would win? The slower but solid construction of Monsignor was still a-building on 2 April 1982 and its first residents were Argentine soldiers.

April 2 1982 saw a big change in the Islands - Spraggon's remarks to the visiting Argentine military invaders that they should leave, otherwise even the penguins would, were a mark of his future role. In full regalia Monsignor now strode around - talking, visiting, reassuring people all would be well. As Papal Representative on the Islands he enjoyed a unique position with the Argentine occupation power and especially with a former acquaintance, Brigadier Carlos Bloomer-Reeve, first LADE representative, who was now the liaison officer between the military and civilians and often put his own future on the line. Many soldiers came to the house and on leaving were told, if asked why, to reply that they had been to confession. Three serious incidents occurred during this period which brought the monsignor into contact with General Menendez. The first the general was able to resolve immediately - the release of the young men held by the military. With regard to the other two - the transfer of prominent citizens and families to an unknown destination and the incarceration of the Goose Green residents - the general was unable to do anything. The monsignor warned him that he was in the Falkland Islands where people enjoyed peace and freedom, not in the dictatorship of Argentina and not to treat people with contempt.

His joy at the victory of the British forces was immense, but tinged with sadness at the death of so many young men. Clearing up the mess and the burial of the dead followed. He spent many hours in the cold hills with the undertakers searching for bodies, eventually culminating in the burials at Blue Beach and Darwin. The calls on his time were intense. Recovering from an aneurism he was caught in the hospital fire at KEMH on 10 April 1984 and was the last to be brought out - presumed to be dead. This incident left him very weak and even more afraid of unattended fires. Together with another survivor he was airlifted to Britain on Good Friday for treatment. He never really recovered, though he hid his frailty very well. His holiday at home in the (English) summer of 1985 was wonderful: encompassing all he had wanted to do and more, were his words coming down from the airport at Mount Pleasant to Stanley. Ten days later, on 27 September a second aneurism in the presbytery proved fatal. Perhaps another life lost to the war or the hospital fire.

The superior general of the Mill Hill Mission, Bishop de Wit, officiated at his funeral at St Mary's. It was followed by interment at Stanley cemetery in the presence of many dignitaries and people and his faithful parishioners.

Monsignor Spraggon is buried within the grave space of Mario MIGONE.  See: Image 1048

Graham Bound writes:  'I knew the old chap well and liked him a lot. He rode a small Suzuki motorbike around town in the early 70s and graduated on to a Mini. Neither mount was able to cope with his vast robes that billowed in the Stanley wind. That always made me smile ... I recall seeing The Monsignor being carried from the smoking shell of the hospital, and I was convinced then that he was dead. Happily he lived a bit longer, though. I think he was evacuated to the UK with my aunt Lena, who was badly burned. '