He first arrived in Stanley in command of the Welsh owned four masted barque Kate Thomas on 17 September 1900. She had lost a lot of sails, had some damaged iron work and was running short of water 91 days out from Cardiff with a cargo of patent fuel. The repairs completed he sailed again on 17 November but not before he had expressed interest in the post of marine superintendent of the Falkland Islands Company. The post was about to fall vacant because the incumbent Captain Rees, a North Walian friend of Thomas, was about to retire. The job was important as it involved the maintenance of the FIC's ships and hulks. Thomas produced excellent references and was duly hired as Rees's successor. 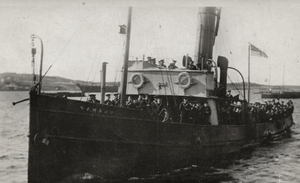 Accepting the appointment, getting relieved of his command of the Kate Thomas was another matter. His owners, William Thomas & Co of Liverpool, insisted he complete the voyage to Portland Oregon.

He did not arrive back in Stanley until April 1901.

He proved to be an excellent handler of the Company's tug Samson. This was a problematic vessel which had been bought second hand in 1900, was underpowered and unreliable. Nevertheless Thomas managed a number of salvage operations. His most notable exploit was the rescue of most of the passengers and crew of the liner Oravia after she had run on the Billy Rock in November 1912.

He retired, probably in 1921. Montague Dean who wrote an unofficial history of the FIC summed him up as 'a good seaman and skilful in looking after the craft of the FIC but also an incorrigible thief and smuggler'. 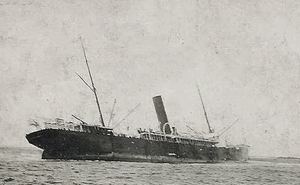 RMS Oravia on the Billy Rocks ...