ship's captain, was born in 1827, the son of Henry Beaglehole, mariner and Ann Beaglehole, née Tippett, of Dartmouth. He married Mary Ann Ford at St Petrox church, Dartmouth on 4 April 1849. He and his family lived at Dartmouth and he followed his father's calling. In June 1869 he was appointed master of the Jhelum for a voyage from Cardiff, probably with a cargo of coal for Rosario, Argentina. 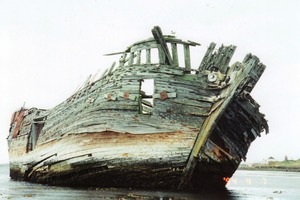 24 Jhelum, in the harbour of refuge.

His command was a wooden three-masted barque of 466 tons built at Liverpool in 1849 for the East India trade and owned since 10 June 1869 by William Widdicombe of Liverpool. She sailed on 30 June 1869 and had to put into Río de Janeiro on 29 September, leaking. She finally arrived at Rosario, Argentina, on 18 November not before she was involved in a collision. After discharging her cargo she left in ballast on 8 March 1870 bound for the Guanape Islands off Peru to load guano. She eventually sailed for home on 12 July and arrived at Stanley on 18 August 1870 leaky and in distress.

The Jhelum was one of eight vessels which entered Stanley harbour through stress of weather, which prompted Governor D'ARCY to report to London that 'this Harbour of Refuge has been of the greatest utility to the Imperial Merchant Marine'. The Jhelum however was to prove a problem to her master and the Falklands administration. Beaglehole did not have the funds to pay for repairs and indeed there was doubt as to whether the ship was fit to complete her voyage. He was obliged to stay at Stanley from August 1870 until May the following year. Without funds to refit the Jhelum and without any response from the ship's owner, Beaglehole was obliged to discharge all but four of his crew. Those dismissed became distressed British seamen and a charge on the local administration until they could be repatriated. Several surveys were carried out of her condition but their results were disputed and the ship remained at anchor and unrepaired. His situation had become desperate by February 1871. FE COBB, the Falkland Island Company's local manager decided (after advancing Beaglehole £106 15s) that he was a bad risk and cut off his credit. 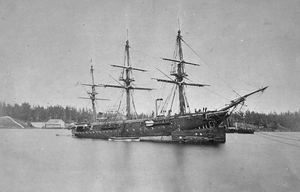 On 24 February, HMS Galatea commanded by Prince ALFRED, Duke of Edinburgh, arrived at Stanley and four days later Beaglehole wrote to Henry Byng, the Falklands' colonial secretary and shipping master: 'Situated as I am without any means to release my ship from her liabilities or food for my mate and self, Captain Scales [a surveyor acting on behalf of Lloyds of London] prohibiting the sale of the ship after six surveys proving her unseaworthy, will you kindly oblige in assisting me by appointing if possible a survey by some efficient officers of the Galatea to prove whether or not the ship is in a fit state to proceed on her voyage'. The request was granted and the vessel condemned as unseaworthy. However, Beaglehole was not immediately released from his charge because neither FE Cobb of the FIC nor JM DEAN wished to act as the ship's agents. The Governor reluctantly agreed to take charge in the interim so that Beaglehole could return to England to try and sort matters out with his owners. Beaglehole took passage on HMS Charybdis at the end of May 1871. JM Dean later agreed to hold power of attorney for Beaglehole and seems to have sold the ship to Packe Brothers for use as a storage hulk in 1874. Cobb never received payment for Beaglehole's debt, but received a payment of £32 and sixpence from M Dean which appears to be the sale price of the Jhelum.

It is unclear how Beaglehole spent his time in the Falklands. Presumably, he and the rump of his crew continued to live aboard the vessel and did what they could towards her upkeep. Whether he had any social life ashore is unclear. On one occasion (10 December 1870), he subscribed five shillings to an appeal for the All Saints' Sisterhood to nurse the sick and wounded on the battlefield (presumably of the Franco-Prussian war). On 18 February 1871, he assisted Captain Scales and JM Dean at the request of FE Cobb as Lloyds' Agent to survey goods recovered from the wreck of the French ship Antonia which had been recovered by the schooner Lotus. When he left in May 1871, his contribution to the history of the Falklands ended. The Jhelum remains after all these years beached off west Stanley as a witness to the troubles of her master between 1870 and 1871.