farmer, was born at Yaxley, Suffolk on 16 December 1912, son of George Vinson and Ellen, née Mortlock. The family were modest East Anglian farmers and the young Vinson went to the local school. Unfortunately, he did not like school and left when he was 14 to help on the family farm. Looking for better opportunities, he went to the Falklands when he was 16 and worked on Saunders Island. His mother's younger sister, Jessie, had married Will Benny, one of the co-owners of Saunders. Life there was fairly tough but Vinson saw the opportunities in the Falklands and when the Bennys sold Saunders Island and moved on to South Africa, he stayed behind. 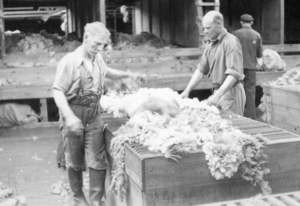 Vinson started his formal employment as a cadet at Port Howard (1932 and under the tutorship of Reginald POLE-EVANS learned the skills of sheep farming. Vinson then joined the FIC in 1939 and worked on several farms including Walker Creek, Port Stephens and North Arm. In 1947 he was appointed manager of North Arm. In 1964 he was appointed Camp manager and moved to Darwin. In 1971 he retired and returned to England after living and working for over 40 years on the Islands.

Although he had failed to achieve at school, Vinson did have an excellent sense of logic. He always enjoyed being on top of the farm's figures and the challenges of dinner-table conundrums. This combined with a wily stockman's eye and an appreciation of the outdoor life made him an ideal sheep farmer. Throughout his career he worked at improving the sheep stock, the quality of the wool and the size of the clip. Through his farming genes and the Pole-Evans tutelage, he had developed a keen eye for good stock and he gave a lot of time and attention to selecting the stud flocks and checking the quality of the animals and the clip. At North Arm there was a small race between the holding pens at the back of the shearing shed and during any afternoon in shearing, he could be found there checking the quality and the consistency of the different flocks as they passed through the shed. When he moved to Darwin he applied his energy to improving the stud flocks on all the Company farms. For several years the Goose Green stud flock was kept at Burnside where he could keep a personal eye on it. In addition to a programme of selective breeding he also arranged for stud rams to be bought in to further improve the breeding stock and ultimately the clip. 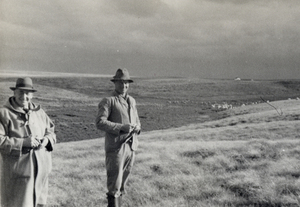 Although a Camp man through and through, Vinson did have to go into Stanley to have his appendix removed. While convalescing after the operation, he met Marjorie  (nee' DOWNS), one of the infant school teachers and they got married in 1948 at Christ Church Cathedral. Although the wedding was a low key affair and not a single photograph was taken, it was a very sound relationship in which they were able very successfully to complement and support each other, raise a family and contribute to the farm and the Islands community.

Vinson enjoyed every aspect of Island life especially riding and working with horses. In the spring, it was getting out into the Camp on horse back for lamb marking, seeing the young lambs and the satisfaction of good lambing figures. In summer, it was gathering and moving of sheep to and from the shearing shed. In the quieter winter months, he liked to tame his own horses and make and repair horse gear using the local untanned leather. He was a typical pioneer of his day and was renowned for fixing, renovating and reusing everything around the farm.

Vinson also enjoyed the Islands' wild life and was a keen photographer. When at North Arm, a favourite family holiday was to take the farm's fencing caravan, pulled by a tractor, and go down to Bull Point to see the penguin rookeries and the seal colonies.

On retiring to England in 1971, the Vinsons settled in Datchet, Buckinghamshire. Although commuter belt rather than rural village, its close proximity to London and the airport proved to be ideal. They were able to meet and host many Falkland Islanders on visits 'home' and so continue to keep in touch with their many friends on the Islands. After a long and active retirement, he died on 25 April 1996 in Datchet.