councillor, was born in Liverpool on 21 May 1905, daughter of Ernest Downs and Florence, née Greaves. Her father was a captain with the Lamport & Holt Shipping Line and sailed the South American run between Liverpool and Buenos Aires. He was rarely home and Marjorie, as the eldest of five children and the only daughter, spent her teen years helping to raise her younger brothers. 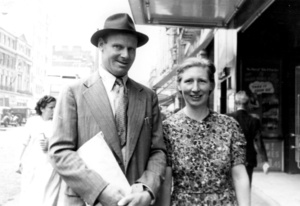 She trained as a primary school teacher and then worked at various schools in Liverpool's working class districts during the 1930s. Here she strove to foster the potential in every child. With the end of the war in sight, she decided it was time to spread her wings and in 1945 accepted a three-year contract as the deputy head of the Stanley Primary School. She met Dick VINSON and at the end of her contract, they got married and she moved to North Arm as the manager's wife.

Her life experiences of helping in her own home, caring about the welfare of the children she taught, through to the resourcefulness required to live through the war, all equipped Marjorie for living in the Camp. She mastered the challenges and chores of domestication Camp style and ran a very productive kitchen and a welcoming home. The only Camp activity that she never enjoyed or mastered was riding a horse. 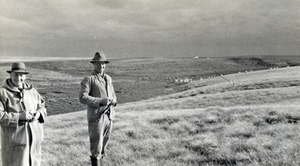 Marjorie never stopped being a teacher at heart and she always had time for children and the welfare of the Camp community. When the travelling teacher was not in the settlement, the children would go to the 'big house' every morning for school lessons. Her kitchen doubled as a clinic where all sorts of minor ailments were treated from applying hot poultices to boils to dispensing medicines and administering injections. Likewise with her tough love approach to caring, when the doctor at Darwin was called out, he always knew the three hour journey was necessary.

Her own two sons, David (b1950) and Kenneth (b1952) attended the same classes as the rest of the farm children until they were old enough to go to boarding school in England in 1962.

In 1964 the Vinsons moved to Darwin. The Camp manager's position requires a husband and wife team and the Vinsons were such a team and were able to compliment each other's abilities. Marjorie capably organised the house and an increasing amount of entertainment. The escalating sovereignty dispute with the Argentine increased both interest in the Islands and the number of official visitors. While acknowledging the difficulties, Marjorie was always a good ambassador for the Islands.

She was elected onto the LegCo in 1964 as one of the Camp representatives - the first elected woman member of council. Here she promoted improved opportunities for education for Camp children and the welfare of the community. At the end of her three-year term of office she was awarded the MBE for her many services. She was not one for airs and graces and received the award at a small ceremony at Government House.

Her husband retired in 1971 and the Vinsons returned to England and settled in Datchet, Buckinghamshire. Marjorie's eyesight unfortunately deteriorated but she never complained and always welcomed visitors to their home. The taking of Smoko was a tradition complete with a spread of home baking and a fair amount of reminiscing about life well-lived on the Islands. She died on 30 November 2000 at Datchet.