Dutch sea captain. Although one of the earliest European navigators to sight the Falkland Islands, comparatively little is known about de Weert, apart from his role in one of several early endeavours to sail westwards from Holland in order to establish a trading route to the Dutch East Indies {Indonesia}. 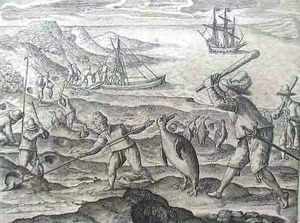 The expedition in which de Weert sailed was organised at the end of the sixteenth century by two Rotterdam merchants, Johan van der Veken and Pieter van der Hagen. Five ships with a total complement of almost five hundred men set off to reach the Pacific by sailing through the Magellan Strait. This was a major undertaking and heavy armaments were taken for protection. The flotilla left the Dutch north coast on 27 June 1598. The ships were the Geloof (Faith) Hoop (Hope), Liefde (Charity) the Trouwe (Fidelity) and the Blijde Boodschap (Glad Tidings), the last commanded by Sebald de Weert.

Before the fleet even reached Brazil, many sailors had died of scurvy, including Jacques Mahu, the expedition's leader and the survivors were forced to land on the African coast to combat the disease. Simon de Cordes, commander of the Liefde, became admiral in Mahu's place and in 1599 the crossing of the Atlantic began. At the eastern entrance of the Magellan Strait the expedition was halted for four months because of unfavourable winds. There were fights with local Indians. Penguins were slaughtered for food, on one occasion 1,400 in a day and a further 120 men died. 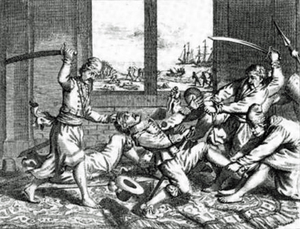 The murder of Sebald de Weert at...

Finally the Pacific was reached in September 1599, but the ships lost contact with each other in a storm. The Trouwe and the Geloof, the latter now commanded by Sebald de Weert, were blown back to the entrance of the Strait. Then they too lost contact with one other and their crews threatened mutiny. Amazingly, at this point de Weert's ship encountered another Dutch expedition led by Olivier van Noort with similar aims, which had set out a year later. But de Weert's compatriots could not assist him. Provisions on van Noort's ships were also running low and de Weert was shown an empty bread chest. Because his men were so weak and the hull of the Geloof was so heavily encrusted with barnacles, it was clear he could not even keep up with Van Noort and had no option but to limp back to Holland.

On 18 January 1600, after landing to gather penguins to salt for food, they lost their anchor and only just managed to get on board the Geloof, losing their boat as well. On the morning of 24 January 1600 de Weert spotted 'drie kleine eylandkens' (three little islets) which appear to have been the Jason Islands, north-west of the Falklands. The ship's journal recorded: 'We found three small islets to windward, not marked in any maps, which we named the Sebaldine Islands. These are in lat. 50 deg. 40'S., sixty leagues from the continent, and contained abundance of penguins; but we could not catch any, having no boat'. As landing was impossible, the crew had to survive on their existing supplies. Daily rations now consisted of one quarter pound of bread and a half a penguin. Early in February one of the few seamen still strong enough to operate the ship broke into the stores, drank wine and ate uncooked rice. He was condemned to be hanged but so desperate was their need for able bodied crew that he was pardoned. Two days later he again stole from the stores and this time he was hanged and his body thrown into the sea. Finally after much further suffering, the Geloof reached European waters in July, with only a third of the original crew still alive. After a failed attempt to buy an anchor in Dover to help navigate the dangerous shallows of the Dutch coast, she returned at last to Holland, the only ship of the expedition to do so.

The Trouwe, the Hoop and the Blijde Boodschap were lost after various misadventures, including clashes with both Indians and Spaniards along the Chilean coast. The Liefde, with a depleted crew, finally reached Japan, where the captain and crew were arrested by the authorities. One of the sailors, an Englishman named William Adams, managed to gain the confidence of the Shogun ruler, Iyeyaso and not only obtained freedom for his shipmates, but was able to establish a Dutch trading post in a land otherwise completely closed to foreigners. (The story has been told in the novel Shogun by James Clavell and a replica of the Liefde is today on display in Japan.)

Back in Holland, de Weert wrote his account of the expedition. Happy to be alive, although with two thirds of his crew lost, he thanked God for his safe return. However the enterprise was hardly a success and no portrait of him is known to exist. His seafaring skills were recognised by his promotion to vice-admiral, but he was killed in Ceylon {Sri Lanka} on his next voyage in 1603, after the king believed that de Weert had insulted him. He may have been judged a failure by his contemporaries, but the work of the Geloof greatly contributed to the description and mapping of the Magellan Strait. De Weert's story, like those of so many other mariners in the Southern Ocean, is a remarkable tale of skill, courage and endurance. For over a hundred and fifty years after his voyage, the 'drie kleine eylandkens' he longed to land on, bore his name, being known as the Isles of Sebald de Weert or the Sebaldines, until, in 1766, Captain John McBRIDE, in the Jason, gave them the name they are known by today.

See: Sebald de Weerts intinerary during his voyage to the South Seas and the Straits of Magellan

Dutch resident in the Falkland Islands.