biologist, was born in Nottingham on 10 February 1896, the youngest of the three sons of Richard Hardy, architect and his wife Elizabeth Hannah Clavering.

After school at Oundle, he went to Exeter College Oxford in 1914. He married Silvia Lucy Garstang, the second daughter of Walter Garstang, professor of Zoology at Leeds. They had two children Michael and Belinda. Hardy's studies in Oxford were interrupted by war service, firstly in the northern cyclist battalion and later as a camouflage officer. 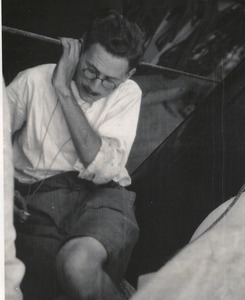 In 1919 he returned to Oxford to read zoology and in 1921 he became an assistant naturalist at the Fisheries Laboratory, Lowestoft, researching the feeding of North Sea herrings on plankton.

After applying to the Discovery Committee for the post of director of science he was appointed senior ship zoologist, in early 1924. He spent the summer preparing in the London office and sailed south on the Discovery with Stanley KEMP as Director and Rolfe GUNTHER as his junior.

Throughout their voyage he worked at developing a plankton recorder, which after further development is now a standard piece of equipment. In and out of South Georgia from 20 February until 17 April 1926, he was engaged in trawling along lines at different depths to investigate what plankton, including krill, they could find and attempting to relate their finds to whaling areas. On land he greatly enjoyed walking and collecting specimens of anything he saw, but spent much time stopping for research. 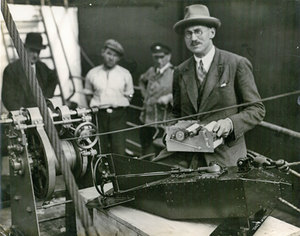 461 Alister Hardy with the continuous...

He visited the Falklands from 24 April to 20 May and while there Captain ROBERTS lent the gunboat Afterglow to take the biologists to investigate fauna growing on the side of the SS Great Britain. On returning to South Georgia after wintering in South Africa he transferred to the William Scoresby, the Discovery Committee's second ship, and immediately began a series of trawling surveys on lines at right angles to the coast.

In early February 1927 he sailed on Discovery to the South Orkneys and South Shetlands before returning to Stanley, transferring to the Scoresby and sailing by an indirect route back to Falmouth the following September. This expedition laid the foundation for all Hardy's future work and in January 1928 he was appointed the first professor of zoology at the new University College, Hull. The intervening months were spent planning the new department while working for the Committee so it was not until Volume XI of the Discovery Reports in 1936 that the hard work done on the Discovery was published. After Stanley Kemp's death he served on the Discovery Scientific Sub-Committee from December 1945 - March 1949.

Hardy's painting of the flensing...

Hardy became Regius Professor of natural history at Aberdeen in 1942 and rapidly moved on to Oxford as Linacre Professor of zoology from 1945-1961, continuing as professor of field studies until 1963.

Hardy was a man with great biological curiosity and many ideas who delighted in thinking up hypotheses and hoping that science would prove them correct. Seeing Gunther up a mast finding insects 'flying past' many miles from shore, he considered aerial plankton and in 1960 one of his talks gave rise to the aquatic ape theory.

In 1969 he founded and became director of a Religious Experience Research Centre now based in Lampeter College, Wales.

His many interests included flying, ballooning, walking, cycling and painting water colours. He wrote easily. Eighty publications written either in his own name or jointly with others covered plankton, fish, aerial drift of insects, ballooning and in later life much on the possible relationship between natural history and religion.

Great Waters (Collins 1967) is a description and update of the work done in 1925-27. His honours included a DSc from Oxford in 1938, later receiving honorary degrees from Southampton, Hull and Aberdeen. He was elected FRS in 1940 and awarded a knighthood in 1957.