mariner, was born at Darwin on 19 November 1915, the third child of Frank Pinkney Sollis, mason, and his wife Catherine Mary Sollis, née Axon.

Jack's childhood was spent in camp at Goose Green and Port Louis, where he became fascinated with boats, spending much of his leisure time messing around in dinghies or on the farm cutter boats. This fascination was to lead him to spending his entire working life at sea; initially, at the age of fifteen, on the sailing ketch Perfecto Garcia (which belonged to 'Cracker' DAVIS) and during the 1930s on the vessels belonging to the Falklands Islands Company Ltd, SS Fitzroy and SS Lafonia. 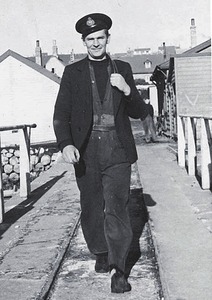 After his marriage to Maude Duffin in 1940, he served as coxswain on the Falkland Islands Government launch Alert. It was for this work that he was awarded the British Empire Medal in 1946, in recognition for the often arduous task of providing the Falkland Islands Defence Force outposts of Charles Point, Mount Lowe, Tussac Point and Ordnance Point with the supply of provisions, mail and liberty (leave) for the duration of hostilities. This service was carried out regardless of weather conditions or time of day and his award reflected his total devotion to duty. On the arrival in February 1948 of the newly acquired government vessel MV Philomel, Jack joined her as coxswain.

In 1949 he was promoted to master and served in this capacity until the Philomel was replaced in 1967 by the purpose built MV Forrest.  Jack took over as master on the new vessel and commanded her for the rest of his working life. In 1977 he was awarded the MBE in the Queen's Birthday Honours. 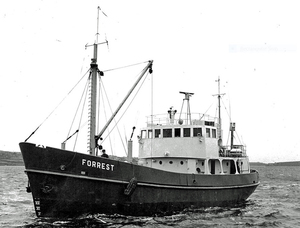 During the morning of the Argentine invasion, 2 April 1982, he had the Forrest in Port William acting as picket boat and reporting the progress, as seen by radar, of the imminent invasion force.

Jack Sollis retired from Government service in 1983 and was overcome by illness and untimely death while on leave in England in May 1985.

His ashes are interred in Stanley cemetery.

During his seafaring days around the Falklands he was well known and respected by all who knew him, be it farm residents or members of the Royal Marines who used his vessel for passage. In 1977 the commanding officer of the Falklands detachment wrote to thank government for the 'invaluable service' which Jack Sollis had rendered to the Royal Marines, with 'his vast experience of these coastal waters'. He commented that the Islands were lucky to have Jack Sollis as master of the Forrest. In his response the chief secretary wrote 'Your remarks concerning Jack echo, as you know, the views of us all here'.

Jack Sollis was equally liked and respected by his crew, who much admired their skipper for his good sense of humour and vessel handling capabilities. He was also a keen gardener which was reflected in the overall tidy appearance of his property at 20 Drury Street, always kept immaculate by the his labours and those of Maude.

Jack Sollis on MV Forrest - with...

Sollis Rock, just south of Sedge Island, is named after him.  In the words of one Royal Navy hydrographer, 'Jack was the friend and patient counsellor of a succession of Surveyors in HM Ships Protector and Endurance. Even after his retirement, they came to his door to discuss their work at the start of a new surveying season. It is fitting that one of the maritime dangers to which he drew their attention now bears his name, ensuring that his contribution to the Admiralty Charts will be remembered as long as men voyage in these waters'.

After looking for many years, it has been a delight to find this bio of Uncle Jack. He was my great uncle on my father's side of the family and I had the great pleasure of meeting him just the once, when he and his wife Maude spent a couple of weeks in the UK on leave, probably around the early 1980s.

I had never realised that Maude's maiden name was Duffin, but I did know there were several family members named Duffin, including Bill who I also met a couple of times as a child in my home town of Basingstoke, albeit this wasn't Bill's home. Bill was my paternal grandmother's cousin and I believe he was an aerospace engineer.

Thank you for all this information, I've found out more by reading this than I've known about Jack for the past 55 years.