sapper and patriarch, was born in Portsea, Hants, the seventh of twelve children of Samuel Biggs and Jane, née Whitcomb, and baptised at St Mary's Church on 6 July 1806. Nothing is known of his early years but it seems that he acquired a trade as a miner, and probably as a boy soldier before enlisting once he reached the minimum age of eighteen. Biggs joined the Royal Corps of Sappers and Miners at Portsmouth in March 1825. His military papers describe him as five feet six and a half inches tall with brown complexion and hair, and blue eyes. In June 1826 he embarked for Gibraltar where the Sappers would be employed maintaining the important fortifications and naval dockyard. In Gibraltar Biggs would experience two of the hazards encountered by soldiers at the time: epidemic disease and military discipline. In 1828 the Rock suffered a serious outbreak of yellow fever, and it was decided to encamp the troops on high ground in order to escape infection. Despite these measures the epidemic took the lives of four privates of the company's strength of forty-eight and many more, including Biggs, were recorded as sick. Biggs was probably still recovering when he was court-martialled for 'unsoldierlike conduct' and using abusive language to a non-commissioned officer. He was sentenced to twenty-one days' imprisonment but must have been suitably contrite as only eight days were served.

In this heightened atmosphere love blossomed, and on 28 September 1829 James Biggs and the very young Margaret Martin were married in the King's Chapel, Gibraltar. In 1830 the company was back in England, but on 23 September Biggs with twenty-two other men again sailed for Gibraltar. In 1834 cholera swept through the garrison causing 380 deaths. Biggs was one of those hospitalised, and was soon in trouble with authority again for being disorderly in his quarters and using improper and threatening language to a non-commissioned officer. On Christmas Eve 1837 Biggs left Gibraltar for the last time and began a posting in England, at Hythe and later Woolwich. The Biggs's first child, William, had been born in January 1831 and a second child, Elizabeth Jane, was born on 15 September 1833. A third child, Amelia, was born in 1838, and a son, James Samuel, was born at Woolwich on 28 May 1841.

Living near the edge of overcrowded London with a wife and four children to support may have made Biggs consider other possibilities, so that when Lieutenant-Governor MOODY called for volunteers to accompany him to the Falkland Islands, he volunteered and was accepted. Biggs had served briefly under Moody and was evidently willing to entrust his family's future to him; he would also have been aware of the tradition of transferring from the garrison in a colony to become a settler. 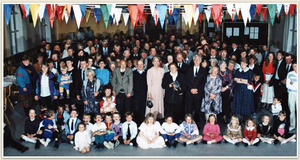 Descendants (and their families)...

The Sapper detachment (which included Biggs, Yates and Herkes accompanied by wives and families) embarked from Woolwich Dockyard on 9 October 1841 on the merchant brig Hebe. They arrived at Port Louis in mid-January 1842. Though ready to defend the colony if the need arose, their primary occupation was construction and repair and Moody requested labourers to serve as chainmen for survey tasks as his detachment were: 'artificers, carpenters, masons, bricklayers and smith and good workmen at their different trades. Their present working pay is one shilling & sixpence per diem whereas Civil artificers in a colony would require 7 or 8 shillings per day'. The Sappers all had to ride and made themselves very expert in the management of horses.

The first winter must have been particularly difficult with a shortage of firing and fresh provisions. One benefit of these straitened circumstances, with no goods of any kind on which to spend their money, was evident in July 1843 when Biggs exchanged cash to the value of one hundred and fifty pounds for a promissory note from Moody. This was an exceptionally large amount for a soldier of lowly rank to accumulate.

When the seat of government was moved from Port Louis to Port Jackson (later Stanley), William Biggs, as the youngest member of staff at Government House, raised the flag at the new capital. The move had meant extreme hardship for the men and their loyalty and hard work was recognised by Moody:

The tents in winter with snow around and wet beneath constantly at work out of doors all their clothes wet and at night little or no fire to dry them; carrying and boating stores, wading in the water on sharp and stony beaches to load and unload boats...Their constant employment at all kinds of rough, hard and laborious work such as carrying on their backs stones, timbers etc. making excavations, drains, road, jetties, building house etc. and this done on wet grass, peaty mud, gravelly and stony beaches with no roads or path.

Moody increased the detachment's pay, justifying the expense by pointing out that:

The strict rules of discipline and a few empty praises from myself were the only alternative and I imagine your Lordship [the Secretary of State] would scarcely approve of such being the only means to arouse and support the energies of men situated as the Detachment here has been.

Biggs's pay was increased to two shillings per day.

Exposure to the elements was not the only danger - the wild cattle ranging over both East and West Falkland were a useful source of food but also a hazard to the unwary. On one occasion a party of sappers were on a hunting expedition outside Stanley when their camp was attacked by a number of wild horses and four savage bulls. Connolly's History of the Sappers and Miners tells how, rifles in hand, the troops ran out of their tent:

Two of the bulls only, stood their ground; and though struck by two bullets, rushed on furiously, and forced the party to beat a hasty retreat. A position was rapidly taken up among some barrels and timber, undercover of which the men were reloading; but the onslaught of the bulls was so impetuous that the operation was interrupted and the party driven into the tents. One of the animals now trotted off; but the other, still pursuing, bolted after the men into the marquee. A ball from private Biggs's rifle fortunately stopped his career, and turning round the infuriated animal tore up the tent, committed great havoc through the camp, and made a plunge at private Yates, who dextrously stepped aside, and firing, shot the bull in the head, and combat ceased.

A fifth Biggs child, Edward Falkland, was born in February 1844 at Port Louis and their sixth child, John Christie, was born in Stanley in 1845. In 1846 Biggs purchased a plot of land, the Arch Green area. Early photographs show a small weatherboard cottage on that site. In 1848, with Moody's term of office as governor at an end, arrangements were made to withdraw the small sapper detachment. Three decided to buy their discharge and remain in the Falklands. Biggs had completed more than twenty-four years, and received an army pension of one shilling and one penny halfpenny per day. He had grown one inch during his service, acquired a scar on his chin, and chronic rheumatism, a legacy of the winter of 1844 spent under canvas in Stanley. His character and conduct were described as very good. In late February 1853 Biggs was accidentally shot while out in a boat. The story passed down relates that he bled to death before the doctor in Stanley could be reached. James Biggs's widow Margaret died on 22 January 1861.

In 1849 a large group of Military PENSIONERS and their families arrived in Stanley as new settlers. Three years later the eldest Biggs son William married Mary Ann Fleming, the daughter of Irish military pensioner Patrick Fleming, and in January 1853 James and Margaret's first grandchild was born. William and Mary Ann had twelve children. A few months after her father's death Elizabeth married a much older man, Charles MELVILLE, They had five children of whom three survived. Amelia married George Kelway and had fourteen children. James Samuel married Harriet Simpson and had two children. Edward Falkland married Phoebe Summers and they had eleven children. John Christie did not marry.

The family name is commemorated by Biggs Road in East Stanley and on a small plaque in Crozier Place, but James Biggs is best commemorated by the very foundation of the town of Stanley which he and a handful of others laid out and by his many descendants who are now active in every walk of life in the Falkland Islands.

See:  For the full listing of the Biggs family  (from the Jane Cameron National Archive)