PENSIONERS, The Military (or Chelsea)


In the late 1840s, after the departure of the majority of the sappers and miners, Stanley consisted of only a few hundred persons, so additional immigrants were very necessary, as was some form of defence. It was suggested that a small group of military pensioners from the Chelsea and Greenwich Hospitals would be ideal candidates, because they had all completed a term in the services yet would still only be middle-aged, fit for military duties and with wives who might yet be of child-bearing age. The secretary of state Lord Grey told the governor in July 1850: 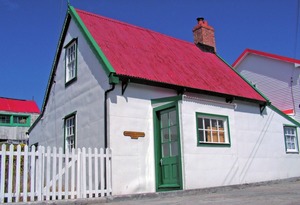 The object of sending out these immigrants was to supply the Colony with a body of men, who would be capable of using arms in case of emergency, and who would, at the same time be able to live by their own industry ... in sending out this handful of men, the object is not to form a fortified post, but merely to obtain the presence of a few steady and loyal subjects trained to arms, who could suppress any sudden tumult or repel any insult from any wandering vessel.

In addition they could help to police the town, particularly at night.

A War Office Memorandum of Conditions on Which it is Proposed to Enrol Pensioners for Service in the Falkland Islands 1849 states that:

A maximum age of candidates should not exceed 45 years and maximum number of children not to be more than 4. Rates of pay at 1 shilling and 3 pence per day for a private, 1 shilling and 10 pence a day for a Sergeant in addition to pension, from the period they left home till embarkation. Conveyance at public expense for themselves and families to port of embarkation, free passage to the Falkland Islands, free food on board and quarter pension in advance.

Further the Memorandum directs that the Pensioners live in '2 roomed kit houses worth £50 each' being shipped on the same vessel and 'large barracks worth £300 capable of containing them with their families immediately on their arrival until the cottages have been put up'.

On arriving in Stanley the Pensioners would 'live in the cottages and be given allotments of 10 acres of land, and with the rights of grazing over an individual quantity of land not to exceed 100 acres.' The men themselves were under the Mutiny Act and Articles of War and were liable at all times to be called out for duty if their services were required.

A group of 30 Pensioners, many from Irish regiments, were duly recruited, and with wives and children sailed for the Falklands on board the Victory, a barque of 580 tons commanded by a Captain Mullens. The entire party - listed opposite - consisted of 120 people, buildings and equipment. Their period of enrolment in the Falklands was for seven years, ending in July 1856, when they were free to go elsewhere, or stay if they wished.

The Victory arrived in Stanley on 13 October 1849, with the addition of Captain James Reid, in charge of the party, with his family, and assisted by Sergeant-Major Henry FELTON. A letter from Governor George RENNIE on 2 November 1849 to Surgeon Superintendent EW Day of Victory reads ' I have directed Captain Reid, in the event of weather permitting, to have the whole party landed this afternoon.' Thus began the Pensioners' sojourn in the Falkland Islands.

The barracks were built, the families duly accommodated therein, until their two roomed cottages were ready. History does not relate how harmonious relations were in the barracks at this time, but with 120 men, women and children in residence, it cannot have been easy.

Unfortunately some of the men did not settle, and in 1853 thirteen of them signed a petition to be transferred to Tasmania, Australia or New Zealand, there being '....much discontent prevailing amongst them...' According to a report by Governor MOORE in 1857, of the original detachment of 30 Pensioners, seven had died, eleven were released from their engagement and had already left the Islands, and five wished to remain as colonists. The remaining seven left in 1858.

A complication, when trying to trace individuals, is that several extra military pensioners arrived after the original 30, confusing the numbers. Some of the families of the men stayed on; Reddie's daughter married John BONNER. The widows of Greig, Fleming, Morris and Simpson remarried in the Falklands. Burne's widow and children are believed to have left in 1858. Adderley's wife died in 1857, when his children appear to have left.

In 1852 James Reid, the commanding officer, was transferred to Tasmania with his family, leaving Henry Felton as staff officer. A further seven Pensioners probably left in 1856 and 1857 according to the Government Land Register, which records the sales of their land and cottages. Those who stayed were Dowers, Short, Smith, Felton and Hawkins (more commonly spelt Hocking) and their descendants are still in the Islands.

The Barracks, and some Pensioners' cottages on Pioneer Row and Drury Street still stand and are used today as private residences. One cottage belongs to the Museum and National Trust and is furnished as a museum in Victorian style.