farm manager, was born near Bishop Auckland, Co Durham on 9 May 1870, the son of William Swinhoe and his wife Annie Elizabeth, née Fletcher. Ernest was educated at the National School in Maryport when the family moved to Cumberland in 1880. Nothing is known of Ernest's early working life until his brother was married in 1899 at St James's Anglican Church, Punta Arenas, Chile on 28 October. Although Ernest's name is not recorded as a witness on the marriage certificate, he was probably present at that service, and he may have emigrated to Chile in the early 1890s when he would have been in his early 20s. The Chilean historian Mateo Martini described Ernest Swinhoe's situation in 1905 as 'a well established resident of Patagonia, having been for many years a farm manager in the employ of Mauricio Braun', a Russian entrepreneur who in 1893 had founded an estancia 'Caleta Josefina' and later established a range of business interests under the name of Braun & Blanchard at Punta Arenas and extending north into Argentina. It is possible that Swinhoe became involved in these developments.

Swinhoe first apparently became interested in South Georgia in 1903, when with a group of other landowners and farm managers, he responded to a public offer from the Falkland Islands Government, originally dated 1900, for interested parties to take a lease of the Island. The group had approached Charles A Milward, the British vice-consul in Punta Arenas, with the objective of obtaining a grazing lease of the island together with mineral rights and consent to undertake sealing. The lease proposed by the government would run for twenty-one years with the right for renewal for a further similar period. There would be a £10 annual licence fee for sealing and a £200 deposit as security. In addition a percentage of the net annual profits had to be made to the government, while a sum of £5,000 was to be expended on works or stock during the first five years.

Preliminary negotations for the lease were not begun until March 1905, when the South Georgia Exploration Company Ltd, registered in Punta Arenas, was born. Ernest Swinhoe, then some 35 years of age, became its manager. Being Chilean, the company caused the Falkland Islands Government some misgivings. The president of the company was Richard Lion and among its shareholders was Henry Kelway, an ex-Falkland Islands colonist. But there was some suspicion in British circles that they were acting as front men for 'less desirable' Chilean nationals. The rules of the company stated it was to have at least twenty and not more than thirty members, each of them subscribing 250 pesos or £16 5s 6d (£16·27). Swinhoe, Kelway and James Winther were named as those to explore South Georgia. 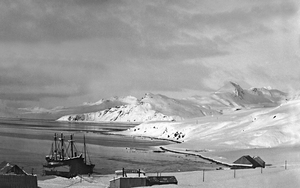 Grytviken in winter during the...

Swinhoe chartered the Consort, 92 tons, a dandy-rigged sailing vessel which sailed from Punta Arenas in July under her master F Schwarz and nine crew (six of whom were Chileans) carrying stores, equipment, and a nucleus of stock, 24 sheep, three mares and one stallion. The Consort arrived at Port Stanley on 19 July. There, final arrangements for the lease were confirmed with Governor ALLARDYCE, who reported to the Colonial Office that a two-year lease had been granted to the company.

Sailing from the Falklands on 31 July, Consort sighted South Georgia on 9 August and sailed along the east coast of the Island to look for the best landing place, anchoring briefly in Possession Bay. Swinhoe arrived in Cumberland Bay on 14 August in the depths of the South Georgia winter and a small whaling steamer flying the Argentine flag came over to see them. Swinhoe was astonished to learn that an Argentine company had already set up a whaling station on the Island. He sailed into Grytviken, where the expedition pitched their tent, landed their animals and made contact with Captain Lauritz E Larsen, the Norwegian under-manager of the whaling station.

During the one and a half months that the expedition remained at South Georgia an uncomfortable relation existed between the two parties. Larsen asked Swinhoe if he intended to stay, while Swinhoe protested that his company, at great expense, had taken out a lease for the whole island and was dismayed to find Larsen killing both seals and whales. Eventually, before leaving, Swinhoe handed Larsen a written protest dated 28 September, requesting his company to withdraw from the 'South Georgia Islands' and having deduced that the Island was not suitable for his intended purpose, sold off his stock to the Norwegians.

On his return to Port Stanley on 10 November, Swinhoe reported the existence of the Argentine whaling company to the Colonial Government. The net result was a period of intense and delicate diplomatic negotiations in Buenos Aires, London, Port Stanley and Punta Arenas coupled with an inspection visit by a British warship HMS Sappho to South Georgia in early 1906. The outcome was that the Argentine company was requested to take out a lease for the area of land they had occupied at South Georgia. As for the South Georgia Exploration Company Ltd, they also negotiated a new lease, on similar terms to the Argentine company, with the intention of also entering the whaling trade. The company, however, lacked both whaling expertise and money. Eventually, in December 1908, having failed to raise more capital in both Punta Arenas and Buenos Aires, Swinhoe and his fellow investors sold their lease, with the consent of the Falkland Islands Government, to a Norwegian whaling company for £1,500.

Little more is known of Swinhoe's life. He was granted Chilean naturalisation letters at Punta Arenas in 1913, but no record has been found of his having married or died in Chile.