naval officer, and commander of HMS Sappho, which visited South Georgia in February 1906 – to investigate the newly established whaling station.Hodges was born on 29 September 1874, the son of Lt-Col John Francis Hodges. He joined the Royal Navy in 1887 and was soon recognised as a man of quality, sound judgement, a capable leader, and a good seaman. He qualified as a gifted French interpreter. Hodges quickly became well known for his concern for the welfare of the men serving under his command. 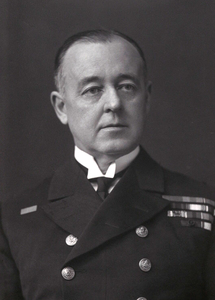 Michael Hodges in later life - as a...

Hodges received the Royal Humane Society Bronze Medal and Certificate on 1 December 1904 for his gallant, but unsuccessful effort to save Commander FW Melvill from drowning by leaping into rough waters off Portland with his coat on. 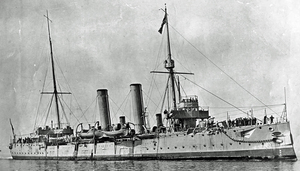 He was appointed in command of the cruiser HMS Sappho in 1905 – and was despatched to South Georgia in 1906, at the request of the Governor of the Falklands and of the Colonial Office, to investigate the emerging whaling industry on the Island. HMS Sappho, 3,400 tonnes, was one of the last battleships built on the Thames; she was launched in 1891 and broken up in 1921. She sailed from Montevideo, on a training cruise with many reserve (RNR) seamen onboard, on 25 January 1906, arriving at Cumberland Bay, South Georgia on 1 February 1906.

Ernest SWINHOE had received permission from Governor ALLARDYCE, who had granted him a two-year lease of the Island for the South Georgia Exploration Company, to take sheep and horses to the island. On arrival at South Georgia in August 1905 Swinhoe discovered that Captain C A LARSEN had already established a whaling station on the Island in November 1904. Swinhoe returned to the Falklands in November 1905 and reported to Allardyce the existence of an Argentine whaling station on the island. HMS Sappho and Commander Michael Hodges were despatched to investigate the situation. 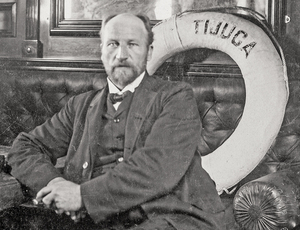 A brief survey of Cumberland Bay was carried out, and Captain Larsen received Hodges very courteously. Larsen took Hodges ashore and showed him around the whaling station. Hodges described the station as being complete in every respect. Larsen was using the dis-masted barque Louise as a store ship for coal and general supplies. Larsen had two other ships that were used as whale catchers. Both Larsen and his brother had their wives with them – Larsen having also brought down for the summer season his five daughters and two sons.

Hodges observed that King Edward Cove was a small bay which afforded an excellent anchorage. Whaling had started by December 1905 and oil was being produced by January 1906. A total of 236 whales had been taken, which had produced 7434 barrels of oil. 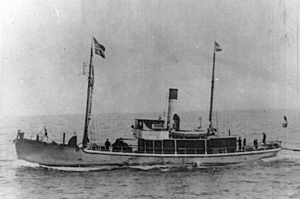 Hodges reported that there was no lack of whales around the Island, and that the distance of the whales travelled from South Georgia depended on the location of their feeding grounds. Very little whaling could be done during the winter season. Hodges also reported on the abundance of seals around the Island, and that there were plentiful sea birds. Wind conditions were very variable.

On 3 February 1906 Larsen took Hodges, and a party from the Sappho, in the whale catcher Fortuna to visit two more bays – Fortuna Bay and Antarctic Bay. During this trip Larsen and Hodges agreed about the location of two navigation beacons that Larsen had brought down with him. On their way back to Cumberland Bay Captain Larsen and Gunner Carl Anton HANSEN invited Hodges to shoot a humpbacked whale – an invitation Hodges accepted with enthusiasm and was duly successful. Hodges then invited the entire crew of the Fortuna to dine aboard the Sappho as his guests. 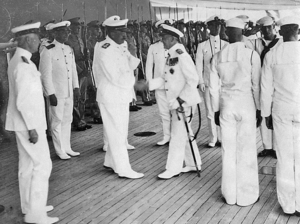 Although the meeting between Hodges and Carl Larsen was very courteous, Hodges pointed out that the whaling company had not got the permission of the British authorities to be on the island. Larsen strongly disagreed with this assertion. Hodges insisted that the Argentine flag should not be flown over the whaling station. If the flag were not taken down, Hodges said that it would be shot down. The flag was lowered, but this matter was omitted from both the ship’s logbook and the official report.

Samples of rock were taken and sent to the Natural History Museum in London Various grass specimens were collected, which were eventually sent to Kew Gardens.

Hodges wished to be back in Montevideo by 13 February1906, so the Sappho sailed from South Georgia on 5 February 1906. On his return to Montevideo Hodges submitted a report to his senior officer - Commodore Paget. This report was forwarded to Governor Allardyce, who then sent it to the Colonial Office on 28 March 1906. 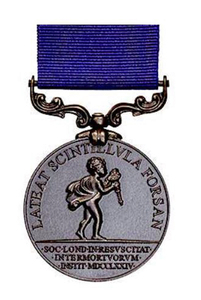 The visit of the Sappho and the report of Hodges stirred the British authorities into action. Letters Patent claiming sovereignty and clearly establishing the British claim to South Georgia were issued on 21 July 1908. Between 1908 and 1909 HM Government issued licences to seven whaling companies. The whaling industry based on South Georgia had begun and it would run for another fifty years.

After the War he was made Rear Admiral Commanding the Destroyer Flotillas of the Atlantic Fleet. He became Naval Secretary in 1923, Commander of the 3rd Battle Squadron in April 1925 and Commander of the 1st Battle Squadron and Second in Command of the Mediterranean Fleet in March 1926.He was Second Sea Lord and Chief of Naval Personnel from 1927 to 1930. Her was promoted to full admiral in 1929, and he was appointed Commander-in-Chief, Atlantic Fleet in 1930.

At the time that of the Invergordon Mutiny in 1931(when sailors of the Atlantic Fleet rioted over pay) Hodges was in the Royal Hospital Haslar at Gosport suffering from coronary thrombosis and pleurisy.  He was therefore not directly involved in resolving the crisis. It is widely agreed that had Hodges been on active service there might not have been trouble at Invergordon. He was relieved of his command because of ill-health, and he retired in 1932. Questions were asked in Parliament about Hodges; Hansard reported on 28 September 1931 that Mr. A. V. Alexander had asked the First Lord of the Admiralty when Admiral Sir Michael Hodges will be well enough to resume command of the Atlantic Fleet?  The First Lord (Sir Austen Chamberlain) replied:

I regret to inform the House that his medical attendants have advised Admiral Sir Michael H. Hodges that he must remain in hospital for some weeks, and that his complete recovery will require a considerable time. In these circumstances, the Admiral has asked to be relieved of his Command and the Board of Admiralty, with great regret, have acceded to his request.

During World War II Hodges was re-employed as Flag Officer in Charge in Trinidad, West Indies. He had a heart attack in the night of 16/17 May 1943 and was placed on the Retired List. In retirement he became Chairman of the Shipwrecked Fishermen and Mariners Royal Benevolent Society. Over his career he was awarded the KCB, CMG and MVO.

A short video of Sir Michael Hodges paying his respects to the American Admiral JV Chase onboard USS Texas can be seen at: https://www.youtube.com/watch?v=iznx-ZS_dDE