ornithologist and botanist, was born in Croydon, Surrey on 20 October 1936. His interest in natural history, especially birds, began in 1940 when his father gave him a copy of The Observer's Book of British Birds. In 1953 he joined the Air Ministry Meteorological Office as a scientific assistant, and in 1956 with the possibility of interesting ornithology, he volunteered to work at Stanley, for the British Antarctic Meteorological Service, arriving in December. 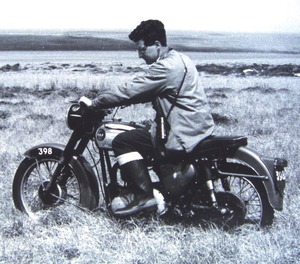 Information on Falkland birds was collected from Falkland Islanders, through direct observations, photography, tape-recording and note-taking in the field. Trapping for ringing many bird species gave data on ring-sizes, age-related plumage changes and moults, site-faithfulness and longevity. Anne Stansbury who was working for the Colonial Education Service helped with fieldwork and the first draft of a bird guide; they were married in Christ Church Cathedral on 21 May 1958. Several expeditions to Kidney Island provided many opportunities for further study. Woods' 1970 paper in Ibis on the avian ecology of this island was the first to document evidence of the importance of Tussac grass habitat to about half the Falkland breeding species. An exciting discovery in December 1961 (with Bob Reid, a VSO Camp teacher) was a pair of Great Shearwaters in a burrow on Kidney Island, the first proof of breeding in the Falklands.

The ringing scheme, trialled in 1960 by Roddy and Lily Napier at West Point Island for the bird-banding program of the United States Antarctic Research Program was at its height in 1962 and 1963 when Roddy, Robin and Anne ringed 3,000 near-fledged Black-browed Albatrosses Thalassarche melanophrys each year. Recoveries were made off eastern South America north to Cape Frio, Brazil (23°S) with a few reaching 16°S on the coast of Angola and the Cape of Good Hope between two and a half and six months after fledging. 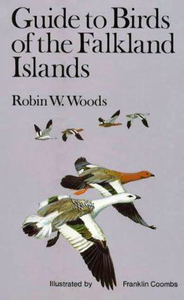 Robin Woods' Guide to Birds of...

In Stanley and at nearby gull colonies, the Woods ringed about 1,300 gulls. Their son Alan (b1960) was a useful lookout and his shout of 'Gulls, Mummy!' resulted in clap netting and ringing many Kelp Gulls attracted to mutton bait in their garden. Several VSO teachers showed an interest and, with training and encouragement, ringed birds in the camp. Adding colour rings to Dolphin Gulls, Tussacbirds and Falkland Thrushes in Stanley and on Kidney Island enabled recognition of individuals without re-trapping, providing data on longevity, territorial ranges and distances travelled. About 180 adult Sooty Shearwaters and 70 White-chinned Petrels were ringed on Kidney Island and some re-caught in subsequent seasons. A Sooty Shearwater grounded in a Stanley garden was ringed in early May 1962 and 28 days later drowned in a fishing-net at Barbados, having flown at least 9,200km around the coast of Brazil at an average speed of 320km per day; the first record of a Falkland shearwater in the North Atlantic.

Woods was posted to RAF Lyneham, Wiltshire in 1963 and his son Martin was born in 1964. Needing a more fulfilling career, Woods left the Met Office. Anne Woods returned to teaching, Robin studied botany, zoology, geography and psychology and from 1974 he worked for Devon County Council as an educational psychologist in the Social Services Department. The bird guide had been completed but with a small potential market, most publishers did not consider it viable. The Birds of the Falkland Islands with a foreword by Sir Peter SCOTT was published in 1975 by Tony Nelson, a friend and former Camp teacher, and soon became a classic. With this book out of print, Robin was commissioned by Lord Buxton to write a second guide, Falkland Islands Birds (published July 1982). At about the same time, Sir Peter Scott asked him to serve on the Advisory Council of the Falkland Islands Foundation, now Falklands Conservation (FC). 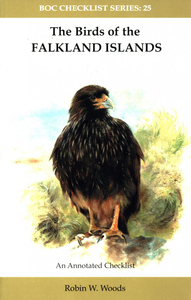 Woods has served as a Trustee of FC from about 1993, Deputy Chairman (1999-2002) and Chairman (2002-2005). His scientific studies for over 50 years have contributed significantly to knowledge of the biodiversity of the Falkland Islands. He was elected a Fellow of the Linnean Society of London in 2005.

See: The birds of the Falkland Islands - an annotated checklist

Robin and Anne Woods; Atlas of breeding birds of the Falkland Islands; Nelson; 1996

Robin Woods; A survey of the Number, Size and Distribution of Islands in the Falklands Archipelago; Falkland Islands Journal; 2001

Robin and Anne Woods; Birds and Mammals of the Falkland Islands; Wildguides; 2006