governor, was born on 16 December 1905 in Poonah {Pune}, India, son of Sigismund and Constance Arthur. His father was a member of the Indian Civil Service. He was educated at Charterhouse and Corpus Christi College, Cambridge. He joined the Nigerian Political Service in 1928, serving there till 1937 when he was transferred to the district administration in Cyprus, the first of three island postings. He became chief commissioner (head of the district administration) in 1948, and governor's deputy in 1950. In 1952 he was appointed colonial secretary, Bermuda, whence he was appointed to the Falklands. 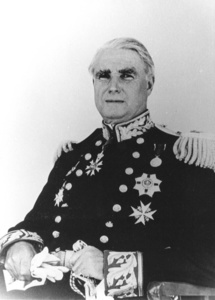 Governor Arthur's time in the Islands from 1954 to 1957 predated the era of Argentine pressure which did not begin effectively till 1964. He was spared having to deal with the frequent, seemingly inherent, conflict between the wishes of Islanders and the strategy of the British Government which was to be-devil the governorships of so many of his successors. Yet he still had to fight the Islands' corner with the Colonial Office over what he saw as ill-informed Whitehall views about projects financed by Colonial Development and Welfare Funds, as his private letters (in the Rhodes House Library at Oxford) show. He was especially angry about what he described to LegCo on 17 February 1955 as the 'recklessly planned and extravagantly and inefficiently constructed freezer at Ajax Bay'.

The Colonial Reports for the years 1954 to 1957 tell of what may now seem to be basic, modest, infrastructural, developments. In 1954 there was the installation of new broadcasting equipment, the opening of the Stanley Infants' School, and the completion of the Darwin Boarding School, largely financed by the Falkland Islands Company to mark their Centenary. In 1955 the new power station was opened. The laying of the concrete main road on the Stanley waterfront began in 1956 and was completed in 1957. Work on the water filtration plant also began in 1956. Work on the important new development of camp tracks began too in Governor Arthur's time. A second Beaver float plane was purchased, though thoughts which he harboured of an air link with Latin America would have to wait. 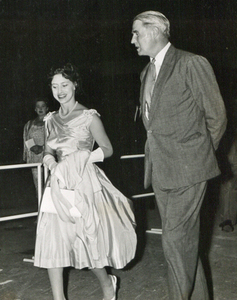 His address to the LegCo on 26 October 1954 speaks of the difficulties of recruiting teaching and other professional staff from overseas, as well as artisans and unskilled labour. It describes the extent to which maintenance of buildings had had to be neglected through labour shortages. These problems feature again in his Address to LegCo on 17 February 1955 and on 4 June 1956 he warned LegCo:

The Public Works programme seems to be like the mythical Hydra; as fast as one horrid head is cut off another one grows. Much has been done on the renovation and repair programme of Government buildings but the work has proved to be much more extensive than had been expected. 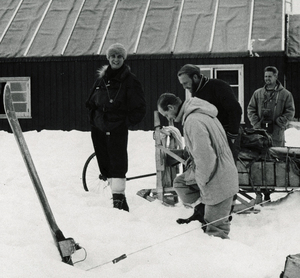 The Rhodes House letters, not of course written with a view to reputation, reveal a man who appears to have been entirely appropriate to the Falklands of his time. He was a passionate horseman who imported his own horses and rode whenever he had the opportunity, covering much of the Islands on horseback and spending days in the saddle. He even persuaded the non-riding captain of a visiting Royal Navy ship to learn to ride sufficiently well to accompany him in taking the 1954 Queen's Birthday parade mounted. With a very light load of paper work when mails were infrequent and administration relatively simple, he had the time to appreciate the people and the place. He was a natural countryman who from time to time took an active part in sheep gathering, cattle gathering and lamb marking, as well as relishing shooting upland geese. He was an indefatigable party-giver and dispenser of hospitality. He had the capacity to relate to all sorts and conditions of men and women and to judge them shrewdly, sympathetically, and with humour.

Yet, though he obviously enjoyed himself, he took his responsibilities seriously. At that time the governor was expected to give a strong lead to ExCo which consisted of a combination of officials appointed ex officio and nominated unofficials to whom the four elected members were added to form LegCo. A letter gives the flavour. 'ExCo went very well, and I got through one or two things which they had thrown out before. If you go on and on at a council or legislature you usually get what you want in the end.' He was quick to assert his authority when he felt it was needed. Of one elected councillor he says 'I told him pretty sharply he was talking nonsense and why'. At the same time he encouraged debate, and democracy in LegCo by obliging unofficial members of ExCo to support publicly the decisions which they had reached in private. Essentially he was the very best sort of old-fashioned paternalist colonial administrator. 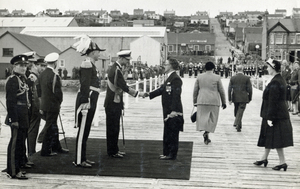 His governorship will be especially remembered for the visit of the Duke of EDINBURGH from 7-9 January 1957. It appears to have been a great success.

In Stanley Prince Philip attended a special race meeting and won the Sailors' Race as well as making the customary school and hospital visits. There was a Colony Ball and a visit to Fox Bay before the Prince departed in the Royal Yacht Britannia for South Georgia, accompanied by Arthur.

In 1935 Arthur married Mary Elizabeth Spring-Rice, the daughter of Sir Cecil Spring-Rice who was the British ambassador in Washington during World War I. They had one son and one daughter.

Towards the end of 1956 he was offered the governorship of the much more sophisticated world of the Bahamas. 'I shall be very sorry to leave here,' he wrote on leaving the Falklands. Sadly there are no letters to tell how he coped with his new islands with their population of 100,000 and burgeoning prosperity increasingly founded on luxury tourism and financial services. He was governor there from 1957 till 1960 when he retired, becoming a JP in East Sussex. Unusually he was appointed CVO and CMG in the same year, 1953, and KCMG in 1957. 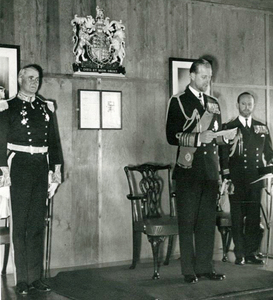 See:  Letters from Oswald Arthur while serving in the Falklands (kept at the Bodleian Library, Oxford)