foreign secretary and baron, was born on 2 September 1914, son of George Brown, grocer's packer, and Rosina, née Mason. He was educated at local schools and ended his schooling at age 15. He took a strong interest in trade union work and was elected Labour MP in 1945. Brown held junior ministerial posts in the Attlee government. When Labour returned to power in 1964, Brown became secretary of state for economic affairs. On 11 August 1966 he was made secretary of state for foreign affairs 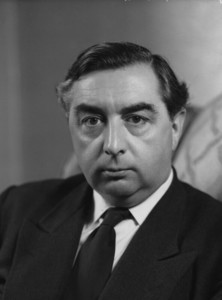 Brown does not mention the Falkland Islands in his political memoirs In My Way (1971). The internal affairs of the Islands were still dealt with by the Commonwealth Relations Office and Brown's direct involvement in Falklands matters does not appear to have been very great. Nevertheless his period as foreign secretary was important in Falklands-British-Argentine relations. It was during this time that the draft Memorandum of Understanding between Britain and Argentina took shape. This was eventually to be abandoned by the British Government in December 1968 but not before it had led to profound mistrust on the part of Islanders of British intentions. All this came to a head in March 1968 when, coincidentally and for reasons unconnected with the Falklands, Brown resigned as foreign secretary.

When Brown took office, talks between Britain and Argentina were proceeding at official level from time to time. Michael STEWART, who had been Brown's predecessor and was to be his successor, had agreed to their resumption when visiting Buenos Aires in January 1966. Britain's main intention was to improve communications between the Falklands and Argentina which were made difficult, if not impossible, by Argentine restrictions. Talks in London in July 1966 between officials ended with agreement to their continuing in October after both sides had consulted their governments. In the words of the Franks Report: 'the British delegation rejected the implication that Britain's occupation of the Islands was illegal but there was agreement that there should be detailed examination... of ways of decreasing friction and of limiting the scale of the dispute'.

However, in late September 1966 when the Duke of Edinburgh was visiting Argentina for the 150th Anniversary of the Argentine Republic, leaflets were thrown at him by students, shots were fired at the house in which he was staying and there was a news agency report of a plot to kidnap him and ransom him for the Falkland Islands. On 28 September the CONDOR Group hijacked an Argentine airliner which landed in the Islands. These incidents embarrassed the Argentine government but they also drew public attention in Britain to the ongoing dispute.

Further talks were held in November 1966. At these talks a British proposal for a sovereignty freeze for a minimum of thirty years, at the end of which the Islanders could choose between British and Argentine rule, was rejected. In March 1967 the British Government for the first time accepted in talks between officials that they would be willing to concede sovereignty under certain conditions, provided that Islanders' wishes were respected. This was the genesis of the eventual Memorandum of Understanding. But the inherent contradiction between British and Argentine positions was apparent from the start. On 23 June 1966 Brown saw the Argentine foreign minister, Costa Mendez, in New York. Costa Mendez stressed that making a transfer of sovereignty dependent on the wishes of the inhabitants would not be acceptable to Argentina. Brown argued strongly that he could not defend any transfer of sovereignty before parliamentary and public opinion if it disregarded the wishes of the Islanders.

This remained Brown's position throughout his term of office and it was the position maintained by officials in many discussions held with Argentina in 1967 and 1968. HMG told the Islanders as much as they felt they could without compromising the negotiations over the wording of the Memorandum. An account of the general thrust of their thinking, covering the various conditions regarding human, cultural and property rights which would have to accompany any change of sovereignty, was given to ExCo by WH THOMPSON, the colonial secretary acting for Governor HASKARD in July 1967, and in February 1968 they were eventually shown a draft of the Memorandum by Haskard. The general run of Islanders knew little or nothing of what HMG was proposing.

Shortly before this, on 14 February, Brown had seen the governor in London. The FCO minute of the meeting records that Brown was 'exceedingly angry at the situation'. Having been advised that there was 'no division of opinion on our side', he had discovered that both the governor and the British ambassador in Buenos Aires were now saying that the existing British policy could not succeed because of the reaction it would provoke in the Islands. Brown denied that he had been aware of the governor's reports of Island opinion. He resented being put out on a limb and had a suspicion that somebody was 'organising a campaign to upset things'.

Indeed they were. On 27 February, after they had seen the draft of the Memorandum, four Executive Councillors sent a statement to all Members of Parliament and The Times asking for urgent intervention to prevent HMG making an agreement with Argentina over the heads of the local inhabitants. As they stated: 'you are aware that negotiations are now proceeding between the British and Argentine Governments which may result at any moment in the handing over of the Falkland Islands to Argentina'. Reference was made in the statement to Lord Caradon's strong words in the UN General Assembly in 1965: 'the people of this territory are not to be betrayed or bartered. Their wishes and their interests are paramount and we shall do our duty to protect them'. This, councillors said, contrasted with the silence of ministers 'since 1967'. Conservative parliamentarians rallied to the Falklands cause. Though The Times commented on 12 March 1968 that there was 'no sign that the British Government are contemplating any change from their position up to now', an all-party Falkland Islands Emergency Committee was formed.

On 15 March The Times, having reported what it described as Lord CHALFONT's 'flaccid equivocations' in defending the government's position in the House of Lords and the optimism of the Argentine Foreign Minister, Costa Mendez, that there might be a favourable outcome to the negotiations, now talked in a leading article 'Betrayal or Barter?' of 'suspicious signs that the Government were contemplating a wholly pointless abandonment of people who believe in them and have trusted them'.

The next day, 16 March 1968, Brown resigned over a failure of the Prime Minister to consult him, reflecting not only his concern at being left out but his mounting dissatisfaction at the way in which the government was being run. His explosive temperament, not helped by his weak head for alcohol, meant that his departure was greeted with some relief.