He was educated at Crewkerne School and the West of Scotland Agricultural College and served his national service in the army.

Blake arrived in the Falkland Islands in 1958 and worked at Hill Cove as cadet/assistant manager.

From 1965 he was manager at Hill Cove until 1987 when the farm was sold to the Falkland Islands Government. He oversaw the division of the land and livestock into eight sections and purchased one of the smaller ones - The Peaks - which he ran with his wife until his retirement in 1999. 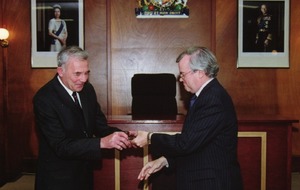 42 Receiving the gavel as first Speaker...

In 1975, he was the first Falklands representative at a Commonwealth Parliamentary Association conference in India and subsequently attended conferences in Mauritius, Fiji, Kenya, the Isle of Man and Saskatchewan. Always interested in the Constitution of the Islands, he sat in LegCo in 1964 when the number of official members was reduced to two and again in the early seventies when nominated members were abolished. 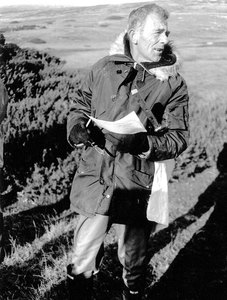 In March 1982, he and Councillor John Cheek formed part of the British delegation which met the Argentines for talks in New York. In 2002, he was nominated the first Speaker of the LegCo He was appointed Justice of the Peace in 1969 and awarded the OBE in 1978. 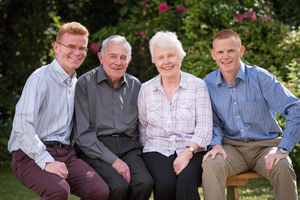 Sally and Tim Blake, with their sons...

It was at the end of 1986 that the fishery conservation zone was established, transforming the economy of the Falklands