architect, was born at Fulham Palace, Middlesex, on 6 March 1829, fourth son of Charles Blomfield, Bishop of London and his wife, Dorothy, née Cox.

Following education at Rugby School and Trinity College, Cambridge, he graduated with a BA in 1851 and MA in 1853. He was then articled for three years to the architect to the Bank of England, Philip Hardwick. 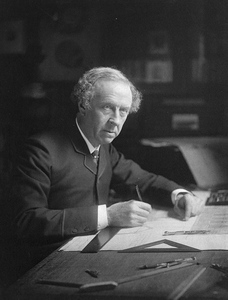 During 1856 Blomfield set up in independent architectural practice in London and rapidly developed a significant ecclesiastical practice through his family connections. He was a prolific architect whose primary activity was church building and restoration, his favourite style being English perpendicular which he considered particularly suitable for church designs.

Blomfield  married, firstly, Caroline Smith (daughter of Charles Case Smith) in 1860 and they had two sons, Charles and Arthur, (both b.1863). Caroline died in 1882 and in 1887 he married Sara, the daughter of Matthew Ryan. 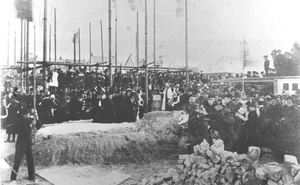 Laying the foundation stone of Christ...

Blomfield became a fellow of the Royal Institute of British Architects in 1867 and was made vice-president in 1886, after which he was awarded the Institute's royal gold medal. In 1883 he was appointed architect to the Bank of England, elected an associate of the Royal Academy in 1888, and knighted in 1889.

He was active overseas and designed, among other church buildings, Christ Church Cathedral in Stanley. Bishop STIRLING raised £3,000, Queen Victoria gave £30 and the Islanders were expected to raise the other £3,000 needed for the building costs 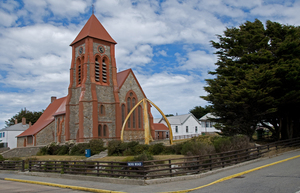 Blomfield's plans of the Cathedral were brought by Bishop Stirling to the Islands in August 1889 and unanimously approved. It is reported that they were the same as the plans which were drawn up by the original architect, John Oldred Scott, 'only much reduced in massiveness' to cut costs. They included a square tower facing the harbour.  Working drawings were then to be prepared and the plans were sent back to England for this to take place. Cut stone, lime and wood for the Cathedral were exported from Britain and a ship was chartered to bring out this material. (This ship is reported to be the Lady Elizabeth, now wrecked in Stanley harbour, but the story is not confirmed.)

Work was begun under the supervision of Vinnell, one of Blomfield's most able clerks of works, towards the end of 1889. Two bricklayers were sent out by the Bishop's son-in-law Robinson, to erect the building with the aid of local labour.  In May 1890 work came to a standstill when some of the local masons gave notice that they would no longer work unless they were paid 12/6d a day - they had been receiving 1/- an hour when working.  The strike delayed progress by two or three months. 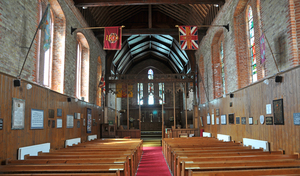 Bishop Stirling laid the foundation stone on 6 March 1890 and, although uncompleted and without an organ, the consecration of the Cathedral by the Bishop took place on Sunday 21 February 1892.

Work then left to be completed included the tower and the ten foot high timber dado. The vestry also required some attention and only about half of the required seats had been provided.  An organ, made in Dublin and costing £270, was brought to the Islands by the Honorary Canon - the Reverend Aspinall and his wife in December 1892 and erected in the course of the next few weeks, to be completed and played for the first time on Sunday 22 January 1893.

The tower was completed in 1903 by Austrian stone masons following the decision to reduce its designed height by twenty feet to stand at ninety feet. The object was to gain stability, but there were also savings in material and labour. 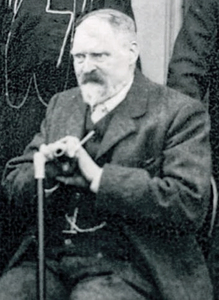 Although the original estimated cost of the building was £6,000, by the time it was completed this had risen to over £12,000. The Cathedral has become a Stanley landmark, the home of numerous memorials and the site for the solemn occasions of Falklands history.

Sir Arthur Blomfield died suddenly at the Royal Societies Club in London on 30 October 1899 and was buried at Broadway, Worcestershire, on 3 November.  His second wife, Sara, survived him.