missionary and bishop, was born on 14 January 1829 in Dartmouth, Devon, the son of Thomas Stirling, a former naval officer who later served in the Coast Guard Service, and Anna Maria Burd Stirling, née Hockin. Theirs was a large family of thirteen children. 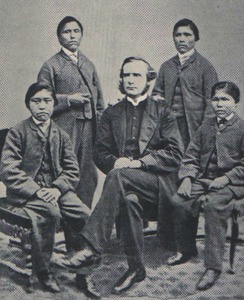 330 Waite Stirling with some Fuegians.

Stirling was the second son; a younger brother, Thomas, was to accompany him during the first three years spent on Keppel Island. Stirling's early experience of school was brief and soon ended as the result of a severe illness. For several years he lived at home, and was allowed to roam freely in surrounding countryside. He was then sent to an uncle to be tutored privately, and at the age of 18 gained entry to Exeter College, Oxford, where he gained a classics degree in 1851. While there, Stirling was introduced to Captain Allen GARDINER, soon to go out to the Beagle Channel in his vain attempt to bring the Christian faith to the Indians.

In 1852 Stirling was ordained deacon in the Church of England and served as assistant curate at St Mary's, Nottingham for the following two years. On 14 July of the same year he married Louisa Jane Phinn, daughter of Dr Phinn of Bath. Ordained as priest in 1853, he moved to Holy Trinity Parish, Nottingham as assistant to Prebendary TM Macdonald. 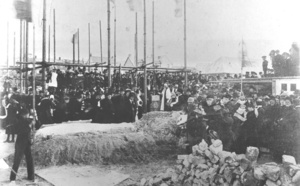 331 Laying the foundation stone of Christ...

During these years Stirling continued his interest in the attempted Christian mission to the Indians of Tierra del Fuego, and in 1857 was appointed full-time Secretary of the Patagonian Missionary Society. By that time the Rev G Pakenham DESPARD had begun his work as superintendent of the Mission on Keppel Island, which was to end so disastrously in 1859 with the massacre of eight members of the mission party at Wulaia, Navarin Island.

Despard and his family returned to England in 1862 and soon afterwards Stirling, with his wife and two daughters, Eleanor Maria (b1854) and Gertrude Louisa (b1860), sailed out to the Falkland Islands in the mission schooner Allen Gardiner as the second superintendent of the Keppel Mission. Arriving at Keppel on 30 January 1863, he found William BARTLETT in charge of the mission farm, and Thomas BRIDGES responsible for the Indians. 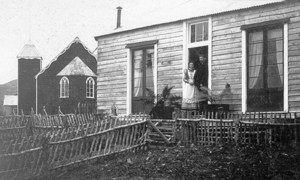 Stirling then began a series of voyages in the Allen Gardiner to visit the Beagle Channel, Santa Cruz and Carmen de Patagonia where missionaries under his care were stationed. During his absences, Mrs Stirling, who had never enjoyed robust health, suffered from anxiety about his safety, from lack of sleep and the effects of winter's tempestuous weather. Stirling decided to move his wife, by then in very poor health, and daughters to live at Carmen de Patagones near the mouth of the Río Negro in Patagonia. They arrived there in August 1864, but Mrs Stirling died on 16 October 1864 from the effects of her illness. Stirling returned to Stanley with his daughters, leaving them in the care of Dr and Mrs William McClinton. Later in 1865 he set sail for England in the Allen Gardiner, taking with him the girls and four Indian boys. They arrived in Bristol on 11 August.

For a second time Stirling offered to go out to South America as superintendent of the Mission. He travelled out alone in January 1867, arriving at Keppel on 23 March. Almost immediately he set out with Thomas Bridges for an extended visit to the Indians of Tierra del Fuego. 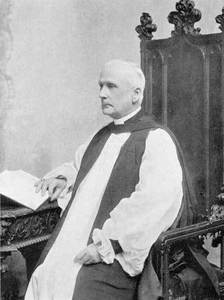 On his return to Keppel, he began to plan what turned out to be the first permanent stay by a European on the shores of the Beagle Channel. Stirling decided that the best way to gain the trust of the Tierra del Fuego Indians was to live among them. So in January 1869 he settled down close to the site of present-day Ushuaia, on the shores of the Beagle Channel, living in a sectional hut erected by the crew of the Allen Gardiner. He passed the next seven solitary months among the Indians, gaining their friendship, until the mission vessel called again with a letter that called him to London to be consecrated bishop of the Falkland Islands.

The ceremony took place on 21 December 1869 in Westminster Abbey. The year 1871 was occupied by his primary visitation of the diocese, and it was not until 14 January 1872 that Stirling was enthroned in Holy Trinity Church, Stanley, by the Rev Charles BULL. Now that Stirling's responsibilities extended to the care of all the work of the Anglican Church in South America (with the sole exception of British Guiana), the time he spent in the Falkland Islands was far less. Notwithstanding, Stirling retained his official address as Keppel Island, where the work initiated by Despard continued until the early years of the twentieth century. 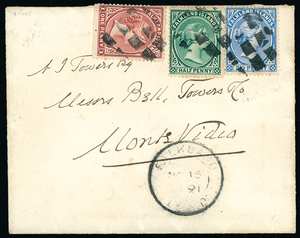 Stirling married for the second time a widow, Lucinda McClymont, the daughter of Andrew and Julia Miller, on 3 May 1888 in Buenos Aires. She died in London on 11 December 1923.

It was after the peat slip of June 1886, which severely damaged  Holy Trinity Church and the school, that Stirling launched an appeal to build a fitting cathedral for Stanley. The necessary funds were raised in the Falkland Islands, in England and in Buenos Aires.

The foundation stone was laid by Stirling and Governor KERR on 6 March 1890, and Christ Church Cathedral was consecrated by Stirling on 21 February 1892.

In 1900, at the age of 71, Stirling resigned his episcopate and retired to live in England. From 1901 to 1920 he was Assistant Bishop of the Diocese of Bath and Wells, and a Canon of Wells Cathedral. He died, aged 94, on 18 November 1923, and was buried in the precinct of the Cathedral. 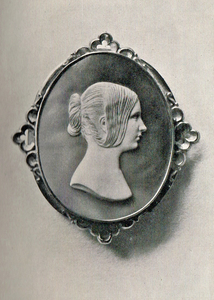 A cameo portrait of Mrs Louisa...

In assessing Stirling's life and impact, there is no doubt that throughout the 38 years he spent in and around the Falkland Islands he exerted a strong leadership, not only in the church, but also in the wider community. He was a support to all, from governor to shepherd. He stood for the highest Christian ideals. He won the respect and esteem of all that came in contact with him, and his practical abilities and his robust spirituality impressed those who knew him. He was a true father in God to all those who were within his pastoral care. 'I fancy myself God's sentinel', he wrote, 'stationed at the southernmost outpost of His great army'.

The anniversary of Stirling's consecration as Bishop was commemorated in 1969 by the issue of four Falkland Islands stamps.

(1)  Bishop Stirling was deeply committed to his church tradition and the glories of the Church of England, but he was also a man of wide sympathies and support of other church traditions.  On the day that the Cathedral in Stanley was consecrated by Stirling (21 February 1892) he insisted that the service be delayed until he had had the opportunity to conduct the funeral service of the Baptist minister at the Tabernacle church in Stanley who had died the previous day. 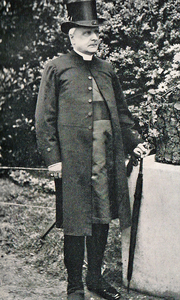 Bishop Stirling as a Canon of Wells...

The Dean of Wells Cathedral (Armitage Robinson) writing in the Bath and Wells Diocesan Gazette after the death of Bishop Stirling said: 'The Bishop of the Falklands was responsible, not only for his special missionary settlements, but also as far as any man could be for the widely scattered communities of the English church throughout the vast continent of South America. The Jesuits, themselves the missionary pioneers of earlier days, bitterly opposed the various efforts of Captain GARDINER to reach the natives; but Bishop Stirling's gentle courtesy quickly won the goodwill of the Roman Catholic bishops, and among the very few things he would tell of his own wonderful past was the unexpected honour and kindness which he met at their hands as he travelled on his distant tours'.

(2)  from the Wells Diocesan obituary: 'He was a winner of hearts wherever he might be, after thirty years of incessant labour, he settled down in Somerset as Assistant Bishop in 1901 ...  The tall. stately presence, the noble head with its silvery hair, the courtly manner, the almost excessive modesty and self-restraint gave an attractiveness that was unique: while the firm lips and rare flashes of momentary indignation revealed the natural force which years of lonely discipline had harnessed to his Master's cause. He had nearly completed his ninety-fifth year, but he never lost his broad minded sympathy. He watched new movements with no apparent anxiety, and readily acquiesced in changes that he himself would not have made. He loved his Lord and left all to follow Him.'

(3)  Stirling never lost his sense of fun and delight in children. One of his grandchildren recounted that one Stirling's favourite tricks during family occasions was his joy at sliding down the stairs of the canonry while sitting on a tea tray.

See:  Text of the sermon preached at Westminster Abbey on 21 December 1869 at the consecration service of Bishop Stirling as Bishop of the Falklands

See:  From Cape Horn to Panama; a narrative of missionary enterprise among the neglected races of South America by the South American Missionary Society