official and scholar, was born in West Derby, Lancashire on 2 August 1916, the son of Harold Staveley Boumphrey (marine engineer) and Susan Evelyn Boumphrey, née Housden. He was educated at Liverpool College and at Pembroke College, Oxford, and joined the Colonial Audit Service in 1939. After service in Nigeria until 1943, his next overseas appointment was to the Falkland Islands as Colonial Auditor from 1947 to 1951, during Sir Miles CLIFFORD's term as Governor. It was typical of Boumphrey that he should interest himself in the history of the Islands and also in Antarctic exploration, following a visit to South Georgia and, early in 1950, a tour of British bases as a member of the Governor's party in RRS John Biscoe. His next posting, at the opposite extreme of climate, was as senior auditor in the Federation of Malaya, whence he moved to Singapore, there finishing his colonial service as deputy director of audit in 1958-59. He now turned to a new career, first as bursar of Godolphin School, Salisbury, then as finance officer of Durham University, and finally, in 1964, as the first bursar of the newly formed Lancaster University, where he served until his retirement in 1982. 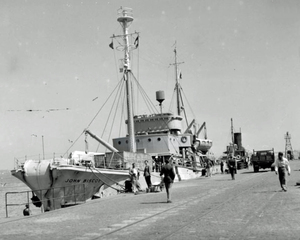 Boumphrey was a kindly man whose ordered mind, scholarly pursuits and wide travel made him a stimulating companion under any circumstances. Outside his family and professional work, his abiding interests were in genealogy and heraldry, and he was an authority in both fields, being the author of several books. His tour of duty in the Falkland Islands led to the publication of papers on the Islands' placenames and on the early history of Port Louis; an annotated translation of HW KLUTSCHAK's paper on a visit to South Georgia in 1877-78; and an edited account of the discovery of Victoria Land in 1841. His (and others) unpublished Preliminary derivations of some Falkland Islands place-names remains a most useful source of information on that subject. He received the MBE and was a Fellow of the Society of Antiquaries. He died at his home in Winchester on 23 August 1987.

See:  The papers of Robert Staveley Boumphrey - at the Bodleian Library