Bohemian traveller and artist (South Georgia), was born in Prague, (then in the Austro Hungarian Empire, now in the Czech Republic), on 3 May 1848.

His father Franz Klutschak was chief editor and later owner of the magazine Prager Bohemia. Heinrich Klutschak studied geography and cartography at the German Polytechnical Institute in Prague to become an engineer. At the same time he attended the Artillery Academy and in 1866 was posted to the Imperial and Royal Artillery, which he left in 1871 to emigrate to the United States of America. Later he signed up on a whaler from New London, Conn, for a voyage to Repulse Bay in northern Canada. 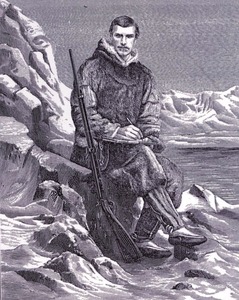 When Captain William Dunbar started a sealing expedition to South Georgia in 1877, Klutschak came aboard the schooner Flying Fish at the Cape Verde Islands together with most of the young crew. On 22 September 1877 Shag Rocks west of South Georgia were sighted. Dunbar anchored at Flying Fish Bay {Wilson Harbour} on the NW coast, before he began an anti-clockwise voyage around the Island. At Cheapman Strand further south, elephant seals were killed to render the oil from their blubber.

Klutschak disliked the mass killing, especially when young seals lost their mothers and predicted the certain extinction of this species. During a storm Dunbar found a safe anchorage in 'Eis Bai' {Undine South Harbour}. When they turned around the southern cape and landed at 'Little Hafen'{St Andrew's Bay} on the east coast in December 1877, Klutschak was astonished to find green meadows on the low hills. Here he observed such birds as albatross and penguins, which he described as most lovable. They passed Cumberland Bay and before the fur seals started to moult in mid-February, Flying Fish collected several hundred skins at the Bay of Islands, Bird Island, and Willis Island. 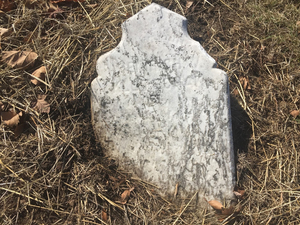 Klutschak died in poverty; his...

On 28 February 1878 Flying Fish left South Georgia to return to New London. When they reached Pernambuco (Brazil), Klutschak landed to return on his own.

In summer 1878 he joined Friedrich Swatka's American Franklin search expedition as surveyor and artist. They landed on the west coast of Hudson Bay on 9 August, where they over-wintered to adapt themselves to the climate and life of the Inuit.

On 1 April 1879 they started their search investigating William Land and Adelaide Land, while they were living mostly from hunting. Whenever the expedition divided, Klutschak took over the leadership of one group. It was he who investigated Franklin's last camp and obtained additional information from the Inuit. Aboard a whaler they came back to New Bedford, Mass, on 22 September 1880. 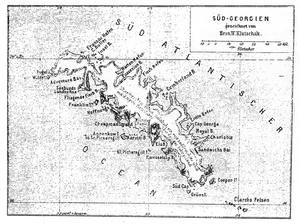 Later Klutschak returned to Prague to publish a book with his travel account. He also lectured through Austria and Germany in 1881 and published several papers about the search expedition, South Georgia and Jan Mayen, (where the Austrian station for the International Polar Year 1882-1883 was to be placed).

After his return to New York he failed to find an appropriate job, became ill with tuberculosis and died without means on 26 March 1890. His friends paid for his burial.

Klutschak had been a conscientious observer of man and nature and was able to adapt to the local way of life in the Arctic. His detailed ethnographical accounts of the Inuit of the Hudson Bay are still valuable today. Due to his achievements in the Franklin search expedition, he was honoured by the Emperor Franz Josef.

His name was given to Klutschak Point two miles SE of Cape Demidov on the south coast of South Georgia.

Heinrich Klutschak; A visit to South Georgia. In: German Rundschau for geography and statistics 3, 1881

Heinrich Klutschak;Overland to starvation cove: with the Inuit in search of Franklin 1878-1880; trans. and edited by William Barr; University of Toronto Press; 1987

Overland to Starvation Cove: with the Inuit in Search of Franklin 1878-1880 Polar Record