German surveyor and geodesist (South Georgia), was born into a family of forest superintendents at Munich, Germany on 13 September 1877. In 1900, as a military cadet, he used a three-month leave for a spectacular ride over the Pamir Mountains. Afterwards he studied surveying and geography at the Technical University of Munich and had further practical education in geophysics at various military and civil institutions in preparation for his second expedition to Tibet and western China in 1903-1905, which he undertook together with his wife and the physician and geographer Albert Tafel. During this expedition Filchner found difficulty working with a scientist on an equal basis, because as an officer he was trained to command and not to discuss.

Filchner organised and led the Second German South Polar Expedition to investigate the region south of the Weddell Sea. After a training expedition to Spitzbergen in 1910, the expedition's ship Deutschland left Hamburg without Filchner on 3 May 1911 and arrived in Buenos Aires on 7 September. Personal problems between expedition members were already apparent when Filchner finally embarked. He caused even more problems, not being used to life on board ship, because he could not accept that he came under the command of the captain. Deutschland left Buenos Aires on 4 October. The expedition arrived in Grytviken, South Georgia on 21 October to take on a load of Cardiff coal and to prepare for the Weddell Sea voyage. The doctor Ludwig Kohl (later KOHL-LARSEN) had to leave the expedition to recover from an appendicitis operation.

During his stay, Filchner became good friends with the leader of the whaling station of the Compania Argentina de Pesca, Carl Anton LARSEN, who put his sealing steamer Undine at Filchner's disposal. Filchner used Undine from 24-30 October and 22-29 November to make a coastal survey during a circumnavigation of South Georgia and a research trip to the South Sandwich Islands, where he could not land due to bad weather. Between these voyages the expedition lost its third officer Walter Slossarczyk, who did not come back from a trip in a small boat in Cumberland Bay. A memorial cross was erected uphill from the Grytviken cemetery. During additional excursions, investigations of the geological structure of South Georgia and the degree of glacier cover were made. A rock collection, including a fossil ammonite, was later used to support the hypothesis that South Georgia is part of the fold mountains of the South American Andes and those of the Antarctic Peninsula. 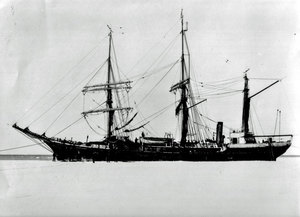 The expedition also visited Karl SCHRADER's former German station at Royal Bay, where Erich Przybyllok, astronomer and earth magnetician, determined the changes of magnetic field since 1882-3 and took meteorological measurements to compare with data from the Argentine weather station at King Edward Point and the data, which was later to be collected in Antarctica.

On 11 December Deutschland left for the Weddell Sea, where they discovered Prinzregent-Luitpold-Land {Luitpold Coast} on 30 January 1912. The establishment of a wintering station on a solid iceberg was disrupted by a sudden spring tide surge. Instead Filchner was the first to survey the decay of a gigantic ice field leaving behind Herzog Ernst Bay. Due to rapidly developing sea ice it was decided to sail north, but the ship was trapped by ice at 73°34'S, 33°12'W on 15 March and drifted north in the Weddell Gyre. A station for various scientific observations was installed on solid sea ice. 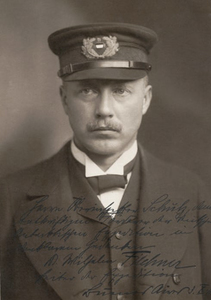 Personal relations on board had already worsened with two groups contending against each other, when the ship's captain died due to syphilis on 8 August. On 26 November the ship got free at 63°37'S, 36°34'W and immediately returned to South Georgia, arriving on 19 December.

With Larsen's help the expedition was dissolved officially when the acting captain (former first officer) Wilhelm Lorenzen, supported by many of the scientists, refused to obey Filchner. Deutschland was handed over to Filchner's friend, the watchkeeping officer Alfred Kling, who sailed to investigate the South Orkney Islands from 29 January to 7 April 1912. In the meantime Filchner's sledge dogs, which had been housed in a wire pen, had gone completely wild and his ponies were running loose at Hestesletten, south of Grytviken. The mutiny was hushed up, but plans for a further expedition to Antarctica were discarded. Instead Filchner returned home, subsequently serving as an officer during World War I. 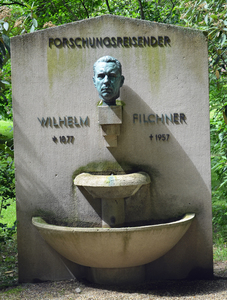 From 1926-1928 Filchner made another expedition to Central Asia to connect magnetic networks in Europe to Asia. In order to consolidate these observations, other expeditions to Central Asia followed in the years 1934-38 and 1939. Due to severe health problems, he returned to India where he was interned by the British in 1940. After World War II he stayed on in Poonah {Pune}, but finally returned to Europe in 1949 to settle in Zurich, where he spent his last years and died on 7 May 1957.

Filchner possessed the energy to plan and carry through various adventurous expeditions making important contributions to mapping and especially to earth-magnetic measurements in Central Asia. But his need for admiration prejudiced his early expeditions, when he was accompanied by other strong personalities like Tafel. Being a military officer, Filchner was used to hierarchy, but not to teamwork in a group of scientific equals. He intended to be leader of the Antarctic expedition, but had to accept decisions from a civilian ship's captain. His poor handling of the situation on board led to the mutiny of ship's officers and most of the scientists. Filchner learnt from this reverse and never included any scientists in his subsequent expeditions, which were very successful.

In 1911 he received a PhD honoris causa from the university at Königsberg {Kakiningrad}. On his sixtieth birthday in 1937 Filchner was awarded the German National Prize for Art and Science. In 1938 he became Doctor of Engineering honoris causa of the Technical University Munich and also professor at the University of Berlin. His name was given to the Filchner Rocks off the east end of South Georgia, and in Antarctica to the Filchner Mountains in Queen Maud Land, Cape Filchner divding the Wilhelm II Coast from Queen Mary Coast and the Filchner Ice Shelf at the head of the Weddell Sea east of Berkner Island, where the German Antarctic 'Filchner Station' operated from 1982 to 1999.