German astronomer and meteorologist (South Georgia), was born into a family of many respected scientists at Brunswick {Braunschweig} in Germany on 30 January 1852.

He studied mathematics and natural sciences in Göttingen , concluding with a PhD thesis in astronomy. He continued his studies in Berlin, until he was employed at the astrophysical observatory in O'Gyalla (Hungary) in 1876. Afterwards he was observer at the Hamburg observatory from 1878-1889. 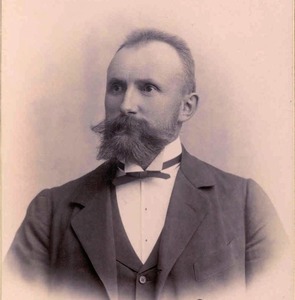 During the first International Polar Year (1882-1883), Schrader led the German meteorological and magnetic station on South Georgia. The expedition, comprising ten persons, sailed from Hamburg on 2 June 1882 to Montevideo where they bought livestock and other equipment. They then departed on 23 July aboard the German naval corvette Moltke and arrived at South Georgia on 12 August, finally landing at Royal Bay on 22 August. They had to clear between one and two metres of snow before they could build a living hut, two magnetic observatories, an astronomical observatory, a revolving dome for the telescope, and a barn. An experimental garden was established later. On 27 August they celebrated the topping-out and on 3 September Moltke departed.

All the scientists were involved in meteorological measurements which began on 13 September and magnetic observations which started two days later. In addition, Schrader was in charge of astronomical investigations and pendulum measurements to determine the coordinates of and the gravity of the earth. 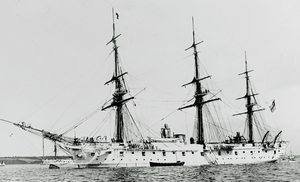 The expedition members were delighted by the splendour of the landscape with its alpine character and the phenomena of foehn winds. On 29 September they sighted the 'great September comet,' which could be seen until 12 December. Schrader was lucky to observe the planet Venus during its whole transit in front of the sun on 6 December 1882, although a violent westerly gale was shaking the revolving dome. The worst gale occurred on 28 December with winds up to 26·3m/sec.

Except for chasing eight sheep, which escaped early in January 1883, their stay passed without special incident.

On Schrader's birthday the expedition members arranged a firework display and named Cape Schrader at the south eastern entrance of Moltke Harbour in his honour. When the weather was favourable, they made 33 land excursions and 13 trips with their small whaling boat. On 27 and 28 August an unusual feature was observed in the recordings of pressure and in the tide gauge, which later could be related to the eruption of Krakatoa on 27 August 1883. 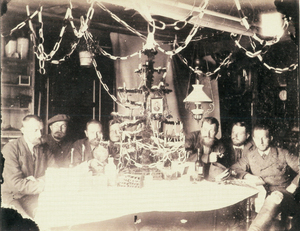 Before the naval ship Marie arrived at Royal Bay on 1 September 1883 to collect the expedition, she called at Port Stanley for three days, where the German Naval Observatory (Deutsche Seewarte) had installed an additional meteorological station of second order led by Captain JHMC SEEMANN, the resident agent of the German Steamship Company Kosmos.

On 6 September 1883, Marie left South Georgia with the expedition, leaving behind all the buildings and observatories. She arrived in Montevideo on 25 September, where Schrader continued his observations to determine the difference in longitude between Montevideo and South Georgia, which was needed to calculate the Island's exact geographical coordinates. 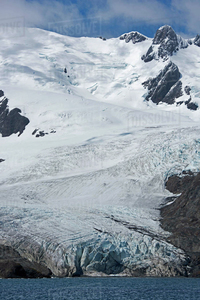 Schrader left on 11 October and reached Hamburg on 15 November 1883.

From 1886 to 1888 he led a scientific expedition of the New Guinea Company to Kaiser-Wilhelms-Land (German New Guinea), where he established a meteorological station in Finsh Harbour. He also collected zoological and ethnographical material, some of which can still be seen in the City Museum of Braunschweig.

In August 1914 he joined a German solar eclipse expedition to the Crimea which was forced to leave Russia hurriedly on the outbreak of World War I.

Schrader was a very conscientious astronomer, who also gained great experience as geophysicist and meteorologist during many expeditions. As station leader he seems to have been very formal and precise. His research and his editorial work for the Neu-Guinea-Kalender (1889-1918) and the Nautisches Jahrbuch ( Nautical Yearbook) after 1899 proved very valuable.

Bottles collected from the base of...

A small glacier flowing to the head of Wilson Harbour on the south coast of South Georgia was charted and named Schrader Glacier during the second German Antarctic Expedition (1911-1912) under the leadership of Wilhelm FILCHNER (1877-1957).

His name was also given to the Schrader Mountains, the Schrader Range and to Mount Schrader (764 m) all on Papua New Guinea.

Schrader died in Berlin on 13 August 1930, shortly after his retirement.