The signing of the postal contract with the Kosmos company was the outcome of a dispute in 1880 between Governor CALLAGHAN and FE COBB, colonial manager of the FIC, under whose direction the then existing mail arrangements (using the Black Hawk) had effectively collapsed. In the Colonial Office correspondence, still surviving in the National Archives, there is a letter supporting change written by Bishop Waite H STIRLING, who pleaded for the setting up of a line of mail steamers which had a resident agent in Stanley independent of the two existing 'monopolists', Mr COBB and Mr DEAN. His views represented those of the majority of Islanders. The resulting contract with the Kosmos line, dated July 1880, and the inauguration of the first ever monthly steamer service between England and Stanley, immediately brought great benefits to the inhabitants of the Falkland Islands. 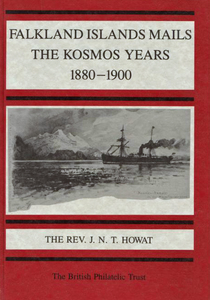 The first agent of the Deutsche Dampfschiffahrts Gesellschaft (German Steamship Company) Kosmos of Hamburg to be sent out to Stanley was Captain JHMC Seemann, to represent solely the interests of the Kosmos line. A year later, stipulations were added that the Kosmos agent was required to arrange for the safe reception and storage in Stanley of wool and merchandise in a receiving hulk in Stanley Harbour. In addition, it was agreed that the Kosmos line should provide a small coasting steamer for the delivery of the inter-island mails and for carrying freight. The inter-island steamer, the Malvinas, was withdrawn from service in 1885. Captain Seemann served as the Kosmos agent for a total of six years, being replaced in 1886 by Hugo SCHLOTTFELDT. Seemann's arrival brought an important change in the balance of power among the established commercial interests in Stanley. This closed world of monopoly was, at a stroke, broken for years to come by the presence and activity of the Kosmos company.