German shipping agent, was born on 7 June 1849 (and baptized on 22 July 1849) in the city of Neumünster (Schleswig-Holstein), one of the sons of Customs Officer Julius Theodor Schlottfeldt (born 1810 in Copenhagen, Denmark) and his wife Henriette Christine née Eyring (born in 1822). Hugo had three brothers (he was the second child of nine): Alfred (born 14 July 1852 in Neumünster), who was a shipping agent and travelled a lot between Hamburg and the UK; Harald, job unknown, (born 20 November 1847 also in Neumünster) and Eduard, who was a sailor (born 18 November 1860 in Hamburg-Ottensen). Both Harald and Eduard emigrated to the US. Harald had emigrated by 1869 and Eduard in 1885. 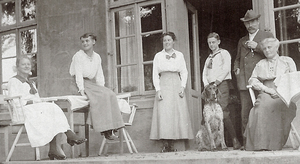 There seems to be a maritime connection to the careers of the Schlottfeldt brothers, and both Hugo and his younger brother, Alfred, became shipping agents. In 1886 Hugo travelled to the Falkland Islands as the Agent of the Deutsche Dampfschiffahrtsgesellschaft Kosmos [German Steamship Company Kosmos], succeeding Captain J H M C SEEMANN in this position, which he held until his contract ended in June 1900. During the latter part of their stay he, and his wife Magda (Magdalene, née Hansen) lived at No. 1 Jubilee Villas, Stanley. Hugo and Magda had one child, a son with the name Hugo Friedrich Louis, who died when less than a year old in 1894 in Hamburg, which probably indicates that Hugo and Magda returned to Germany from time-to-time during their 14 years in the Falklands, and possibly, in this instance, to ensure that their child was born in their homeland, and, almost certainly, to seek specialist medical attention towards the end of his short life.

In addition to his duties for the Kosmos company Schlottfeldt engaged in other trading activities (although this strictly speaking against the terms of his contract with the shipping line). In particular he dealt in Falkland Island stamps for a couple of years (latterly with permission from the Government), and created many of the now much sought after classic covers and postcards of the period before 1900. He normally charged a servicing premium of 5% on the face value of the stamps and covers sold to his customers, who came from many countries of the world. It is highly likely that he also organized the first set of Falkland Island pictorial postcards in 1900 with the help of the Hamburg publisher Albert Aust. He may have traded in other goods – a surviving order in 1897 for sugar, sweets, bird seed, cereals and beer glasses is inconclusive, the quantities are large, a hundredweight of sugarloaf, but not, considering time and distance, any greater than might be needed for domestic use. 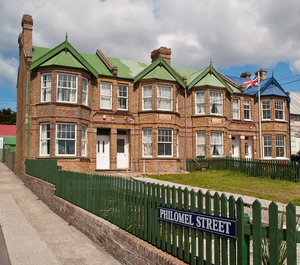 The Schlottfeldt's home in Stanley -...

It is very clear is that the Schlottfeldts were held in considerable affection by Islanders, and the April 1901 edition of the Falkland Islands Magazine recorded - “After a residence extending over fourteen years, Mr Hugo Schlottfeldt is leaving the Colony by next steamer to Sandy Point [Punta Arenas] whence he will proceed by Kosmos Steamer to Hamburg. The best wishes for their future welfare will go with Mr and Mrs Schlottfeldt from us all.” Gifts were exchanged, and it seems that Hugo’s long service in the Islands was marked by a signal honour, his appointment as Consul of the German Empire by Kaiser Wilhelm II on 29 September 1900 (he may have acted in an unofficial capacity prior to that date). This official appointment was surely made too late to be considered anything other than an honorific gesture (it was only approved by King Edward VII on 4 April 1901 and only published in London on the 12th, so it is possible that Schlottfeldt did not know of the appointment until his return home to Hamburg, having left the Falklands on 18 April aboard the Oravia).

On their return to Hamburg the Schlottfeldts lived for a short period at Hoheluftchaussee in the city but then seem to have retired to the countryside and a village just outside Hamburg called Wellingsbüttel (Bramfeld). There Hugo and Magda died in 1927 within a day of each other – he on 15 July and she on the 16th. They are buried in a family plot in the Ohlsdorf Cemetery in Hamburg with nine other members of the Schlottfeldt family. 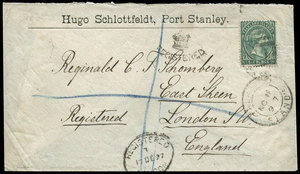 Registered envelope from the German...