civil servant, councillor and marksman was born in Stanley on 20 December 1917 the son of Richard Napoleon and Mary Anne Bound (née Hutchinson). John, as he was always known, and his younger brother Horace Leslie, known as Nap (see BOUND, Horace Leslie) spent many of their formative years at Rincon Grande and then at Saunders Island. Their father managed both sheep farms. In the late 1920s, the family returned to Stanley, seeking better education and opportunities for the two boys. In Stanley, Richard built Sydney House at the junction of Barrack Street and John Street, an imposing building which the family ran as boarding house, catering mainly to camp residents visiting Stanley. 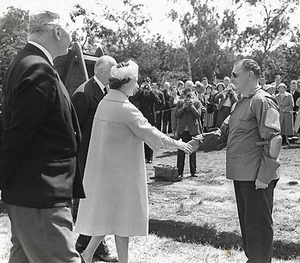 John Bound joined the civil service in April 1934, taking the lowly position of post boy and messenger at the Post Office. Through the 1930s and ‘40s, his career was marked by steady and regular promotion. There were junior and middle management post in the Electrical Department, the Post Office and the Government Secretariat.

He enjoyed a successful parallel part-time career in the Falkland Islands Defence Force. He joined the Force in 1935, and on the outbreak of the Second World War was deployed to the defensive outposts. Along with other FIDF members, he would alternate duties on the hill-top and coastal observation posts and gun batteries with his civilian work in Stanley. He was promoted to sergeant and spent much of his wartime service at Canopus Hill, where a six-inch gun battery defended the approaches to Port William. After the war, he was commissioned, and as Lieutenant Bound became Aide de Camp to the Governor. In 1953, he was promoted to captain and, the same year, was awarded the Efficiency Decoration and Clasp for 18 years good service. He became the force adjutant and quartermaster. 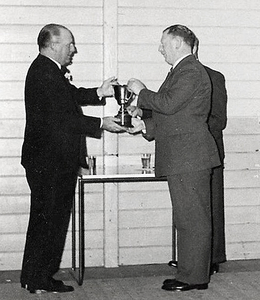 John Bound’s civil service star really began to shine after the war. In 1947, he was appointed Acting Assistant Colonial Secretary and Clerk to Councils. He travelled to Britain, for training in the Comptroller and Accountant-General’s Department at the General Post Office in London. On his return to Stanley, equipped with relevant GPO knowledge, he was appointed Acting Postmaster. In 1954, he travelled to the northern hemisphere again, this time to Gibraltar, where he had work experience and training with the Gibraltar Government. Upon his return to Stanley, he was appointed Assistant Colonial Secretary.

Clearly, his administrative skills and judgement were recognised by Government House, as in 1959 he was temporarily appointed to Legislative Council, probably standing-in for the Colonial Secretary or the Colonial Treasurer who occupied ex-officio seats on LegCo. He would serve briefly as a ‘nominated official member’ of LegCo again in 1964. He was appointed Justice of the Peace in 1953. 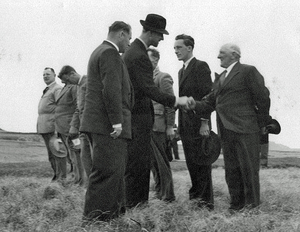 He had always been keen on shooting and would spend weekends hunting for game in the camp. But it was through membership of the Falkland Islands Defence Force Rifle Association that John Bound discovered his true metier: full-bore target shooting. Through the 1950s, ‘60s and ‘70s he was one of the Islands’ top marksmen. He chaired the Rifle Association for several periods during the 1960s and ‘70s, and regularly led the Islands’ team at the annual Bisley tournament in Surrey, achieving much personal success there. In 1964, he was introduced to the Queen, as captain of the Falklands team.

Another highly successful Falklands marksman, Gerald Cheek, wrote of John’s shooting career “The earliest that he appears in the local rifle clubs prize list was as the winner of the Consolation Handicap in 1935. He certainly was the top shot in the majority of the shooting competitions at one time or another during his long and distinguished career in the club, including being the champion marksman on a number of occasions.  He was one of the members of the shooting club who were presented to the Duke of Edinburgh at the Sapper Hill range during the royal visit in 1957.”

His final senior post of Superintendent of Posts and Telecommunications involved responsibility for the Broadcasting Station, the Post Office, the telephone network, the Radio-telephone Station and the Wireless Station (which maintained contact with the outside world). This post took him back to the department where he started his career as a messenger in 1934. He retired from the civil service in December 1972.

John Bound never married, although his family tell of a serious romance in Britain, probably while training with the General Post Office. Stoic and uninclined to share intimate thoughts, he would not talk about this, but his family believed that the romance ended when his would-be partner shied away from living in a tiny and very remote colony.

He enjoyed a quiet retirement, travelling to South America often, particularly enjoying holidays in Buenos Aires. He continued to shoot to a high standard and chaired the Falkland Club (generally known as the Gluepot). During the Argentine occupation of the Falklands, he would often meet with fellow members of the Club to discuss the events of the day. He was seated at the bar one evening, shortly before curfew, when fellow member Tom Perry burst through the front door, propelled by an Argentine soldier, intent on searching the building. As Tom Perry felt the steel of a gun in his back, John Bound looked at him, stroking his beard, and said, “Hmm, ineligible guest, Mr Perry. That’ll be a £25 fine.” As a founder member and periodically chairman of the Gluepot, he could have a daunting, somewhat patrician, attitude but this was leavened by the dry sense of humour exhibited in the Tom Perry incident (as recounted by a much younger member, Fraser Wallace).

After the 1982 war, he almost certainly spent more time in the bar of the club than was good for him, and he suffered from several chronic health problems. In 1985, he began a new life in Britain, where he believed he could better manage his health.  He settled in the Hampshire seaside town of Southsea. But his plans for a new life came to very little. Within a few months of arriving in Britain, he suffered a sudden deterioration in his health, and died on 21 April 1985 He was 67.