businessman, was born on 15 July 1923 in Hertfordshire. The family moved to Australia for a time, returning to England when he was 11 and settling in West Sussex.  He left school at the age of 15 and began working for local estate agents before joining the Royal Air Force in 1940. He remained in the RAF until the end of the war, working as ground support crew, including a period in Malta. 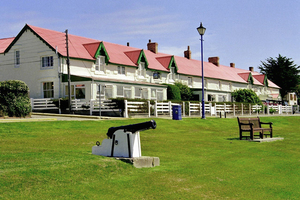 King had always had wanderlust and did not fancy a commuter's life in England. When, in 1951, he saw an advertisement for a job with the retail section of the Falkland Islands Company in Stanley, he seized the chance.  It was initially a four-year contract, but 56 years later he was still living in the Falklands. For many of his eighteen years with the FIC he was manager of the West Store and therefore played an important part in maintaining a flow of essential supplies for the community. In November 1955 King married Falkland Islander Nanette (Ning) Pitaluga, (see Nanette KING ), and the couple had three children, Barbara (b 1958), Alison (b 1960) and Anna (b 1964).

Leaving the FIC in 1969, Des King and his wife bought the Ship Hotel on Stanley's seafront and transformed it into a comfortable and friendly hostelry. The hotel introduced a new standard of hospitality to Stanley and was an important service to the growing tourist industry.  The Kings introduced a restaurant service and Stanley's first fish and chip shop. Later, still under their management and by then the Upland Goose Hotel, the establishment achieved some international fame as a place of safety for civilians during the Argentine occupation of Stanley. 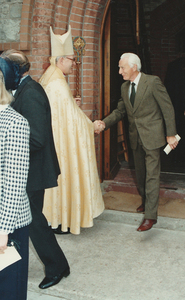 Des King greets the Archbishop of...

His wife died in February 1991, but King remained active in community affairs. He had long been a stalwart supporter of Christ Church Cathedral, and held the office of trustee for fifteen years. As chairman of the Cathedral Restoration Committee, he led a campaign to save the building from further decay. £250,000 was raised to replace the roof, repair stained glass windows and renew the heating system. The adjacent Parish Hall was also totally refurbished. This work was accomplished in time to celebrate the 100th anniversary of the cathedral's consecration in 1992.

He was also heavily involved with the Stanley Golf Club during its early days and served as chairman. He was the treasurer of the Stanley Horticultural Society, and chairman of the Stanley Sports Association.  Immediately after the 1982 war, he was very active in clearing the racecourse of shrapnel, abandoned Argentine equipment and unexploded ordnance. In preparation for the special race meeting of 1983 (to mark the 150th anniversary of British government), he secured much help from racecourses in the UK to bring the course up to the standard required. He retired from the Sports Association three years later and became one of the vice-presidents. 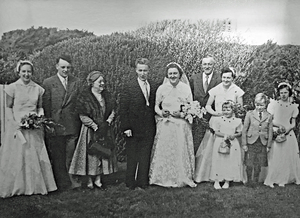