councillor, was born in Stanley on 12 May 1930, the third child of Alexander Pitaluga and Eva Amelia, née Hansen. Alexander was the manager of Gibraltar Station at San Salvador on East Falkland, and Ning grew up enjoying a typical rural Falklands life. She was taught mainly by travelling teachers, among them Jeffrey HAMM, but spent periods at school in Stanley, first at the Catholic school run by nuns attached to St Mary's Church, and later at the government school. She left - as all children did in those days - at the age of 15 and returned to Salvador as the settlement teacher, notwithstanding her age and the responsibility involved. Among Ning's pupils was her brother Robin, who was just three years younger than her, and three cousins. 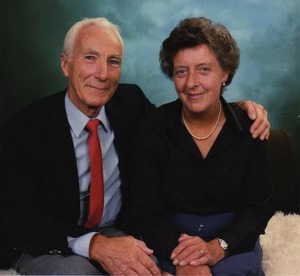 In November 1968 Lord CHALFONT, then a junior minister at the Foreign Office, visited Stanley on a mission to encourage rapprochement between the Islands and Argentina. Like most other Islanders, Ning King was hostile to the Argentine claim and suspicious of the apparent British intention to part with the Islands. Lord Chalfont addressed a joint meeting of Executive and Legislative Councils. Just prior to the arrival of Lord Chalfont, the two Councils were temporarily amalgamated to facilitate discussion of, and responses to, the proposals and pressures brought by him and his team. After his departure, it was agreed to carry on with the joint Councils arrangement for the remainder of that Council's period in office. The sovereignty issue dominated council business then, as it does now, but Ning took pride in dedicating time and effort to issues that made a difference to the everyday lives of her constituents. It was typical that she was proud to have been the moving force behind the establishment of a children's park in the centre of Stanley. Following in the footsteps of her mother, Ning became involved in the Red Cross Society, and spent many years as chairman. She also dedicated much time to the establishment and running of the Stanley Youth Club - no mean feat, considering this meant raising funds for and supervising the building of a clubhouse at the west end of Stanley's Victory Green. 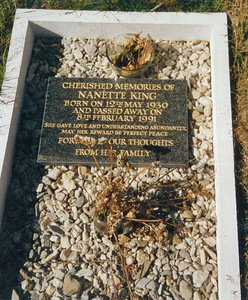 In 1969 Des and Ning King bought the Ship Hotel from the Falkland Islands Company. The hotel had operated only as a pub for many years, but the Kings renamed it The Upland Goose, refurbished the rooms and began catering to a gradually growing tourist trade. For many years it was the only hotel in Stanley. The Kings introduced a restaurant service, public and lounge bars and a fish and chip shop. During the Conflict of 1982, they opened the hotel to local people: the thick stone walls, supplemented by window embrasures filled with bags of corn and flour, offered relative safety as Stanley came under bombardment.

In 1987 the Upland Goose Hotel was sold to Witte Boyd, a British fishing company, and Ning and Des King retired, planning to spend their retirement between a new house in Stanley and a home in West Sussex. However, while in the UK, Ning was diagnosed with cancer, and she died soon afterwards on 8 February 1991. Her ashes were returned to the Falklands to be interred at Salvador, the farm she had always called 'God's Own Country.' A plaque in the Cathedral honours her memory and that of other members of the Pitaluga family.

Mrs. King was a lovely lady whom I remember from my time with the Pitaluga family in 1989-1990. The whole family are super. Great memories!🙂